Douglas Dean Osheroff (born August 1, 1945) is a physicist known for his work in experimental condensed matter physics, in particular for his co-discovery of superfluidity in Helium-3. For his contributions he shared the 1996 Nobel Prize in Physics along with David Lee and Robert C. Richardson. Osheroff is currently the J. G. Jackson and C. J. Wood Professor of Physics, Emeritus at Stanford University.

Osheroff was born in Aberdeen, Washington. His father, William Osheroff, was the son of Jewish immigrants who left Russia. His mother, Bessie Anne (Ondov), a nurse, was the daughter of Slovak immigrants (her own father was a Lutheran minister). Osheroff was confirmed in the Lutheran Church but he was given the chance to choose and decided not to attend any longer. He has stated "In some sense it seemed that lying in church is the worst place to lie. I guess at some emotional level I accept the idea of God, but I don't know how God would manifest itself."

Osheroff earned his Bachelor's degree in 1967 from Caltech, where he attended lectures by Richard Feynman and did undergraduate research for Gerry Neugebauer.

Osheroff joined the Laboratory of Atomic and Solid State Physics at Cornell University as a graduate student, doing research in low-temperature physics. Together with David Lee, the head of the laboratory, and Robert C. Richardson, Osheroff used a Pomeranchuk cell to investigate the behaviour of 3He at temperatures within a few thousandths of a degree of absolute zero. They discovered unexpected effects in their measurements, which they eventually explained as phase transitions to a superfluid phase of 3He. Lee, Richardson and Osheroff were jointly awarded the Nobel Prize in Physics in 1996 for this discovery.

Osheroff received a Ph.D. from Cornell University in 1973. He then worked at Bell Labs in Murray Hill, New Jersey for 15 years, continuing to research low-temperature phenomena in 3He. In 1987 he moved to the Departments of Physics and Applied Physics at Stanford University, where he also served as department chair from 1993-96. His research is focused on phenomena that occur at extremely low temperatures.

He currently serves on the board of advisors of Scientists and Engineers for America, an organization focused on promoting sound science in American government. 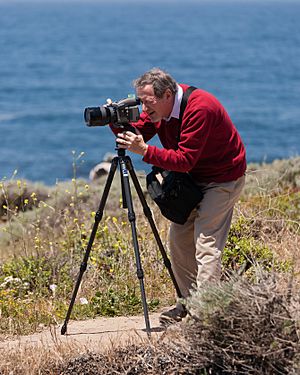 Osheroff photographing during a trip to Big Sur with his students

Osheroff is left-handed, and he often blames his slight quirks and eccentricities on it. He is also an avid photographer and introduces students at Stanford to medium-format film photography in a freshman seminar titled "Technical Aspects of Photography." In addition, he has taught the Stanford introductory physics course on electricity and magnetism on multiple occasions, most recently in Spring 2008, as well as undergraduate labs on low temperature physics.

Among his physics outreach activities, Osheroff participated in the science festivals for middle and high school students, is an official guest of honor at the International Young Physicists' Tournament 2013.

He married a biochemist, Phyllis Liu-Osheroff, in 1970.

Osheroff is one of the 20 American recipients of the Nobel Prize in Physics to sign a letter addressed to President George W. Bush in May of 2008, urging him to "reverse the damage done to basic science research in the Fiscal Year 2008 Omnibus Appropriations Bill" by requesting additional emergency funding for the Department of Energy’s Office of Science, the National Science Foundation, and the National Institute of Standards and Technology.

All content from Kiddle encyclopedia articles (including the article images and facts) can be freely used under Attribution-ShareAlike license, unless stated otherwise. Cite this article:
Douglas Osheroff Facts for Kids. Kiddle Encyclopedia.