Douthat State Park is a state park located in the Allegheny Mountains in Virginia. It is in Bath County and Alleghany County. The park is 4,545 acres (18 km2) total with a 50-acre (20 ha) lake.

The Douthat Land Company, a group of businessmen, donated the first portion of land — 1,920 acres (780 ha). In 1933, the Virginia General Assembly allotted $50,000 for the purchase of land for state parks, and the remainder of the present-day park was purchased with this money. Douthat State Park opened on June 15, 1936 as one of six original state parks in Virginia, all built with the men and resources of the Civilian Conservation Corps. The site of the park was originally almost completely covered by forests; all of the original cabins, campsites, trails, roads, and even the entirety of Douthat Lake were created by the CCC work crews.

Approximately 600 men from the Civilian Conservation Corps developed and constructed the majority of the modern-day park system between 1933 and 1942. 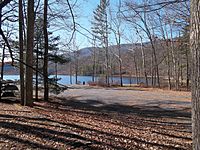 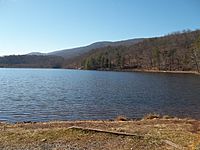 Views of the lake from boat launch area

All content from Kiddle encyclopedia articles (including the article images and facts) can be freely used under Attribution-ShareAlike license, unless stated otherwise. Cite this article:
Douthat State Park Facts for Kids. Kiddle Encyclopedia.