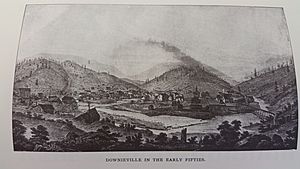 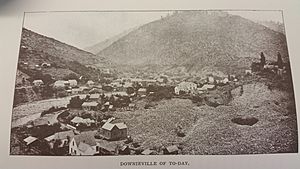 Downieville is a census-designated place in and the county seat of Sierra County, California, United States. Downieville is on the North Fork of the Yuba River, at an elevation of 2,966 feet (904 m). The 2010 United States census reported Downieville's population was 282.

Gold was discovered by Francis Anderson on 14 Sept. 1849, at the location where the town now stands. Anderson had joined Phil A. Haven that same year along the North Yuba River.

Downieville was founded in late 1849 during the California Gold Rush, in the Northern Mines area. It was first known as "The Forks" for its geographical location at the confluence of the Downie River and North Fork of the Yuba River.

It was soon renamed after Major William Downie (1820-1893), the town's founder. Downie was a Scotsman who had led an expedition of nine miners, seven of them African American men, up the North Fork of the Yuba River in the Autumn of 1849. At the present site of the town they struck rich gold, built a log cabin, and settled in to wait out the winter. By 1850, Downieville already had 15 hotels, 4 bakeries, 4 butcher shops, and numerous saloons.

Downieville is the location of the first hanging of a woman in California. Josefa Segovia, a young and pregnant Californio resident of the town, was lynched by a mob on 5 July 1851. The lynch mob held a mock trial, and accused her of killing an American miner that had harassed and attempted to assault her for several days. The mock trial quickly led to hanging her from the Jersey Bridge in town. Josefa Segovia remains the only pregnant woman hanged in the history of California.

In 1853 Downieville was vying to become the new state capital of California, along with fifteen other California communities to replace Vallejo. However, the capital was moved to Benicia for a year, and then in 1854 to Sacramento, its location ever since.

The Northern Mines area of the gold rush had a number of mining camps with colorful names, such as Brandy City (originally known as Strychnine City), Whiskey Diggins, Poverty Hill, Poker Flat, and Camptonville. Many of these camps disappeared after the gold rush, or are ghost towns. Downieville had reached a peak population of over 5,000 people in 1851, but by 1865 had significantly declined. It survived due to its status as the county seat of government in Sierra County, and from its geographic location between Sacramento Valley and Tahoe region/Nevada destinations.

The town is a popular destination and central hub for mountain biking trails and events. The renowned "Downieville Downhill" singletrack trail has a 4,400 feet (1,300 m) drop over its 17 miles (27 km) length. There are shuttles to the trailhead available in town, which is its terminus. It includes long and narrow suspension footbridges across canyons and streams.

The town hosts the world-famous Downieville Classic mountain biking races, a two-day event with an Enduro style or Super-D downhill race, and an extremely challenging cross-country cycling race. In 2003 the Single Speed World Championship was held in Downieville.

The Downieville Museum is in an 1852 stone building that was originally a general store, among other things, and was eventually donated to the city by its owner J.M.B. Meroux. With original iron doors and window shutters, originally housing a store built and operated by the Meroux family whose gravestones are displayed prominently at the old Downieville cemetery. The museum displays local artifacts, historic items, pioneer portraits, and vintage photographs, depicting the life of this community over 160 years, from its Gold Rush origins to the present day. It also displays a scale model of the turn-of-the-century Downieville business district, and a replica of the 1,000 ounces (28 kg) Sierra County gold collection. It is an exact duplicate the real gold specimens and gold bars from Sierra County mines, that are on display in the Los Angeles County Museum of Natural History.

There are a variety of lodging choices in Downieville and its surroundings, some are on the North Fork Yuba River. They include: Forest Service campgrounds, motels, bed and breakfast inns, rental cabins, and backcountry campsites.

Downieville has its own post office on Main Street, and the town's ZIP code is 95936.

Wired telephone numbers for the town follow the format (530) 289-xxxx.

Downieville is home to the Mountain Messenger, which is the state's oldest weekly newspaper, and is still published covering the area's news, events, and history. Eschewing any online versions, is sold to everyone through the U.S. mail, and includes subscribers far beyond Sierra County.

According to the United States Census Bureau, the CDP covers an area of 3.2 square miles (8.3 km²), 99.83% of it land and 0.17% of it water. Most of the town is built on Riverwash soils; higher locations are on Hurlbut gravelly loam or Deadwood gravelly sandy loam.

This region experiences warm (but not hot) and dry summers, with no average monthly temperatures above 71.6 °F or 22.0 °C. According to the Köppen Climate Classification system, Downieville has a warm-summer Mediterranean climate, abbreviated Csb on climate maps.

All content from Kiddle encyclopedia articles (including the article images and facts) can be freely used under Attribution-ShareAlike license, unless stated otherwise. Cite this article:
Downieville, California Facts for Kids. Kiddle Encyclopedia.