Downtown is the central business district for Bakersfield, California. Located in the heart of the city, Downtown Bakersfield is easily accessible from all its other parts. It is also reemerging as the center of Bakersfield’s arts, culture and entertainment sectors. Downtown contains several of the cities major theaters, sporting complexes, museums, and historical landmarks.

Bakersfield has always had some districts located downtown. Recently, as part of a redevelopment effort, others are being created. 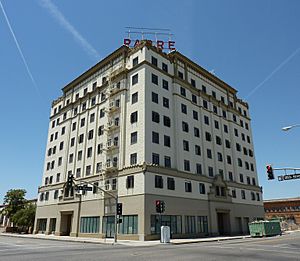 The Padre Hotel building, renovated and reopened in 2010, has been a longtime landmark in Downtown Bakersfield.

The Arts District is one of the newer districts to be defined in Downtown Bakersfield. It is roughly bordered by 21st Street, Chester Avenue, 17th Street, and "G" Street. Theaters in the district include the Fox Theater (20th St. and H St), Stars Theater (Chester Ave. and 20th St) and Spotlight Theater (19th St. and H St). In addition, several art galleries are located around the intersection of 19th Street and Eye Street. The Arts District is also home to the historic The Padre Hotel, which has been remodeled and reopened as a boutique hotel. The district has also begun holding First Friday which showcases galleries and allows for street vendors on the first Friday of every month in support of local artists.

Civic Center is the center of government for both the City of Bakersfield and the County of Kern. It is roughly bordered by Truxtun Ave, Q St, BNSF railroad yard, and H St. Major government buildings include Bakersfield City Hall, County of Kern Administrative Building, hall of records, Superior Court, and Municipal Court.

Although structures representing the center of government, such as City Hall and the Court House are located there, growth has resulted in many services being moved to other places throughout the city. Also, many state and federal services are also placed in locations outside of the Civic Center.

Civic Center has also become one of Bakersfield’s sport centers. Civic Center also houses the Rabobank Theater and Convention Center (formerly known as the Civic Auditorium). This is the largest theater and convention facility in the city. It is also conveniently located next to the Marriott Convention Hotel. The Rabobank Arena (formerly known as the Centennial Garden), is a large indoor multipurpose arena. McMurtrey Aquatic Center houses a 50-meter competition swimming and diving pool. There is also the Bakersfield Ice Sports Center, an indoor ice rink used for junior and adult league hockey and recreation.

Mill Creek is another one of Downtown’s newer districts, and is still being developed. When fully completed, Mill Creek will consist of a mixture of both low and high density residential, commercial and retail. The redevelopment area is defined to be Golden State Avenue, Union Avenue, California Avenue, and "Q" Street. Running through the center of Mill Creek is the Mill Creek Linear Park. This runs along the manmade Kern Island Canal, which has been redesigned to have the look of a natural river.

A major attraction in the area is the Bakersfield Museum of Art. The Beale Memorial Library, which is the headquarters for the Kern County Library System, is also located in the Mill Creek. Another important structure is the Amtrak station, which is Bakersfield’s rail link to the San Joaquin Valley.

Other Neighborhoods and Districts

The following are neighborhoods and districts which are near to Downtown Bakersfield. Some people consider them to be a part of Downtown. 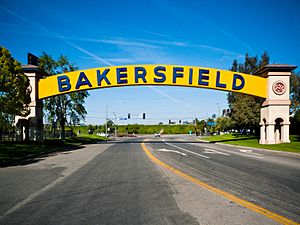 Formerly named Pierce Road, Buck Owens Boulevard was renamed in 1998 in honor of long-time Bakersfield resident and country music legend Buck Owens, who died in 2006. Buck Owens Boulevard runs north/south, parallel to Highway 99, between Rosedale Highway/24th Street in Bakersfield, and Airport Drive in Oildale. Buck Owens Boulevard is located near Beach Park and is the heart of Bakersfield's Country Music scene. The main attractions in the area are the original Bakersfield Sign (formerly located at intersection of California and Union Ave.) and the Buck Owens Crystal Palace a unique museum, store, concert hall, and restaurant. 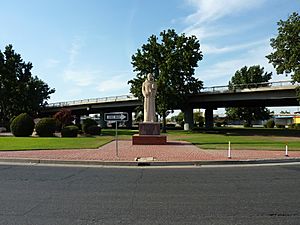 Downtown also is the primary hub for all modes of intracity and intercity transportation, except air travel. Golden Empire Transit (GET) provides transportation to Greater Bakersfield from the downtown transit center. Kern Regional Transit provides intercity transportation from GET downtown transit center or Amtrak station. Amtrak provides rail connection to the San Joaquin Valley north of Bakersfield, and several bus routes to points west, south and east of the city (with tickets that travel by train at least once).

Although traveling to downtown is relatively easy by car, traveling through it is more difficult. Since SR 178 freeway and Golden State Avenue (SR 204 freeway) stop at the edge of Downtown, cars must travel on surface streets to connect to additional freeways. This has created heavy traffic on major connecting arterial roads, especially on 23rd Street and 24th Street, which are one-way in each direction. This is especially a problem for cars traveling from the northeast to the southwest, since 23rd/24th St. is the most direct route between those two points.

All content from Kiddle encyclopedia articles (including the article images and facts) can be freely used under Attribution-ShareAlike license, unless stated otherwise. Cite this article:
Downtown Bakersfield Facts for Kids. Kiddle Encyclopedia.