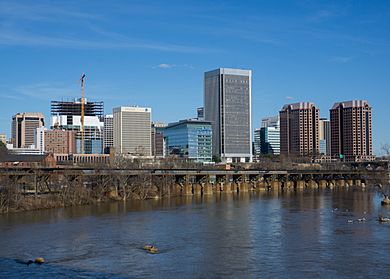 Skyline from the James River

Richmond is now widely considered Virginia's "tallest" city because of many tall buildings in what is Richmond's central business district, surrounding the Virginia State Capitol and many government office buildings (many dating to the New Deal). The James Monroe Building and SunTrust Plaza tower over 449 ft, and 400 ft, respectively, making them Richmond's tallest buildings, and the state's second and third tallest in the behind the Westin Virginia Beach Town Center at 508 ft. Other towering skyscrapers include the Federal Reserve Bank of Richmond, Bank of America Plaza, the James Center, Richmond City Hall, the Riverfront Plaza twin towers, the James Madison Building, Dominion Resources headquarters building, Main Street Center, the Central National Bank, and VCU Medical Center (which includes several hospitals, most over 200 feet, and the new School of Medicine under construction will be 12 storeys). Other important buildings Downtown include the Richmond Coliseum and the Greater Richmond Convention Center (which includes a tourist information office). Shockoe Bottom and Shockoe Slip also have nightclubs, bars, condo towers and lofts in various architectural styles.

From slave traders to skyscrapers

From the 1800s, downtown Richmond was a booming city, one of the largest in the nation, and a major player in the slave trade market. The district now known as Shockoe Bottom was the largest and most famous slave trade market in the entire nation, with people traveling from the South to trade, purchase, or sell slaves. When the Civil War came, though, Richmond became much of a military town, serving as the capital of the newly formed Confederate States of America. As the war came to an end, the South, in a last resort, deliberately set fire to Richmond, so that when the Union troops arrived, the entire city was ablaze. The troops tried to extinguish the fire, but 80 percent of the buildings of Downtown Richmond was completely burnt to the ground. In the era of Reconstrucion, Richmond devised to rebuild and prosper back to the top as it once was, and quickly rebuilt itself. Now that all of the slaves were free, Richmond saw new economic opportunities in other businesses, such as finance, retail, and banking. In the 1920s, America shifted into an Art Deco period, which included the construction of many fancy buildings in Downtown Richmond, notably the Central Bank Building. Also, department retailers saw investment in the downtown sector, and opened up flagships. This included Sears & Roebuck, Thalhimers, and Miller & Rhoads. But the slow yet massive move out into suburban areas began making its mark on Downtown, as these department stores expanded out to the new suburban shopping centers, and eventually Sears closed the downtown store, and Thalhimers and Miller & Rhoads went defunct in the 90s. Although retail was becoming less and less of a viable economy for downtown, banking and big business began booming, and in the 1960s, Richmond began a massive build-out, which included the construction of over 600 buildings. This would go on into the 80s, until the last few skyscrapers were topped out. In 1978, the Federal Reserve Bank of Richmond, designed by renowned architect Minoru Yamasaki, debuted. Now, the economy of Richmond is booming, with several Fortune 500 companies headquartered there. Dominion Resources, MeadWestvaco, and Universal are among those headquartered in the downtown district. MeadWestvaco built its new headquarters in 2010. However large areas of the town were allowed to fall into disrepair until the creation of large swathes of HUD priority areas in the worst areas. Developers were quick to take advantage of the generous re-development loans especially since there was a ready-made market in the form of students requiring cheap housing.

Richmond's downtown is rich in history especially from the Civil War and reconstruction period, the "Gilded Age". A great deal of attention has been devoted to the potential tourism holds for the city, however the mainstay remains the VCU facilities and students together with the banking interests that form the backbone of the city. Industry friendly investment in infrastructure has enhanced Richmond's reputation and attracted business through the establishment of areas such as the Virginia BioTechnology Research Park, (located north of the Richmond Coliseum), which markets itself as a premier office park for research. However although much has been done in Richmond towards establishing a true urban core there are still concerns among both civic and private institutions that the city will risk crime and dilapidation in the Downtown areas unless investment is forthcoming. The City of Richmond Downtown Master Plan concretises the official line which is to build upward and create a Condo tower-based residential area Downtown. This will provide "the perfect place to live, work, and play". This will not solve the fact that there are no major national chain stores located in downtown or its direct vicinity. A rapid transport system to provide faster links between Washington and Richmond is also mooted as important to the create of New Richmond according to Mayor Dwight C. Jones: high-speed rail.

Downtown Richmond also is home to some of the nation's biggest festivals, including the National Folk Festival from 2005 to 2007, which spawned the Richmond Folk Festival, which is now one of the biggest festivals in the state, drawing as much as 200,000 people in its weekend long schedule. It takes place each year on Brown's Island and the surrounding area. There is also the National Beer Festival, which was scheduled to come to Richmond for 2011, but will return next year on account that it was cancelled under mysterious circumstances. There are much more festivals that bring nearly a million people to Richmond every year. There is also the 2nd Street Festival in Jackson Ward, considered part of Downtown, and an Italian Festival, the Que Pasa? Hispanic Festival, and in the holidays, the James Center Grand Illumination.

All content from Kiddle encyclopedia articles (including the article images and facts) can be freely used under Attribution-ShareAlike license, unless stated otherwise. Cite this article:
Downtown Richmond, Virginia Facts for Kids. Kiddle Encyclopedia.