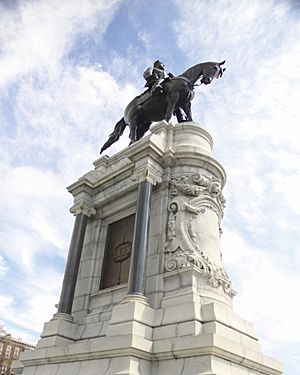 The Fan is a district of Richmond, Virginia, so named because of the "fan" shape of the array of streets that extend west from Belvidere Street, on the eastern edge of Monroe Park, westward to the Boulevard. (Though the streets rapidly resemble a grid after moving through what is now Virginia Commonwealth University). The Fan is one of the easterly points of the city's West End section, and is bordered to the north by Broad Street and to the south by VA 195, although the Fan District Association considers the southern border to be the properties abutting the south side of Main Street. The western side is sometimes called the Upper Fan and the eastern side the Lower Fan, though confusingly the Uptown district is located near VCU in the Lower Fan. Many cafes and locally owned restaurants are located here, as well as historic Monument Avenue, a boulevard featuring enormous equine statuary of Civil War Confederate generals and a statue of tennis icon Arthur Ashe. Development of the Fan district was strongly influenced by the City Beautiful movement of the late 19th century.

The Fan District is primarily a residential neighborhood consisting of late-nineteenth and early-twentieth century homes. It is also home to VCU's Monroe Park Campus, several parks, tree-lined avenues and three of the city's historical monuments. The District also has numerous houses of worship, and locally owned businesses and commercial establishments. The Fan borders and blends with the Boulevard, the Museum District, and the Carytown district, which features the ornate Byrd Theatre. The appearance of the Fan District is frequently compared to that of the Bourbon Street neighborhood in New Orleans although the two places are actually quite different architecturally upon close examination.

Following a succession of owners, an architecture museum, the Virginia Center for Architecture, took occupancy in 2005 of Branch House on Monument Avenue, a residence designed in the Tudor style by the firm of John Russell Pope in 1914. 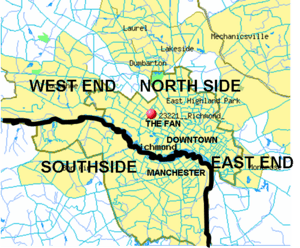 Richmond is often subdivided into North Side, Southside, East End and West End 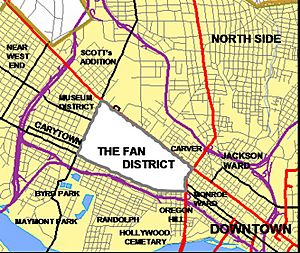 The Fan is one of many other Neighborhoods of Richmond Virginia 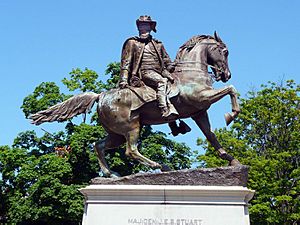 The Fan is often incorrectly described as significant for having one of the longest intact stretches of Victorian architecture in the United States, but most of it was actually built after the end of the Victorian era and is arguably more Edwardian and Revival in style. Almost all of the housing stock was constructed in the first decades of the twentieth century and exhibits the pared back victorianism of Edwardian architecture. Colonial Revival and American Craftsman architecture is common as well, with Revival architectural types arguably the most common (as was common to the time period) Revivalism (architecture).

Other architectural styles include: 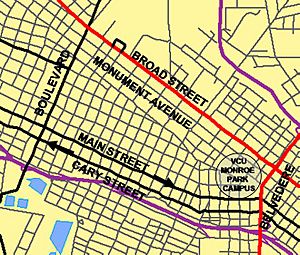 The boundaries of the Fan

In 1817, the Fan was plotted as the village of Sydney on land formerly owned by William Byrd II. Primary development of the Fan occurred after the Civil War through about 1920. Streetcar lines leading from downtown influenced development; the nation's first electric streetcar system was inaugurated in Richmond in 1888.

As development increased from downtown at the turn of the 20th century, Franklin street became a fashionable "West End" address. A desire for a West End address drove rapid real estate development of the area, changing the area from rural tobacco fields in 1880 to being almost fully developed land by the 1920s. As development accelerated, the University of Richmond (then located on Lombardy Street) was moved west to a more rural location (its present Westhampton location). During the Great Depression, many of the single-family homes in the area were converted to apartments.

The term "the Fan" was coined in the mid 20th century by a Richmond Times Dispatch editorial, as the appellation "West End" no longer applied.

All content from Kiddle encyclopedia articles (including the article images and facts) can be freely used under Attribution-ShareAlike license, unless stated otherwise. Cite this article:
Fan district Facts for Kids. Kiddle Encyclopedia.