The dredge oyster or Bluff oyster, Ostrea chilensis, known in Chile as ostra chilena, the Chilean oyster, is a species of marine bivalve mollusc in the family Ostreidae.

This species is native to Chile and New Zealand.

Also, a self-sustaining population in the Menai Strait was deliberately introduced from the Fisheries Laboratory, Conwy, during the 1960s as an experiment to establish if they could form an alternative to the native oysters Ostrea edulis in fisheries, when the species was shown to be unsuitable because of low recruitment and vulnerability to parasites and pathogens the experiment was abandoned. O. chilensis has now spread to other areas of the Menai Strait and is regarded as an invasive species.

This bivalve is found from low tide to depths of up to 35 m. 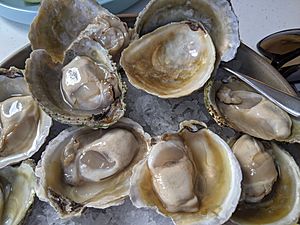 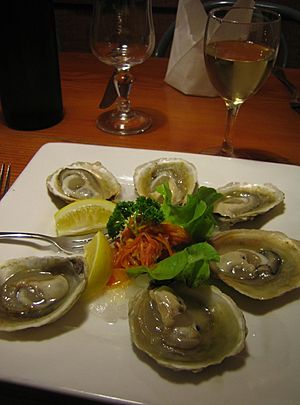 Bluff oysters at a restaurant

In New Zealand, they are a prized delicacy, and harvested from March to August from the Foveaux Strait oyster fishery, which centres on the town of Bluff (hence the local name). From the early 1980s, the fishery went into serious decline, due to the outbreak of an oyster parasite, Bonamia exitiosa, with the disease killing an estimated billion oysters between 2000 and 2003. The population has been recovering since 2003, with fishermen voluntarily limiting the catch to half the allowable to aid the revival.

Changes in river flows in Southland, due to farming and especially power generation, carrying less limestone deposits into the Strait, is therefore believed to have caused an increase in susceptibility to Bonamia, as well as lower growth rates for some seasons in the past, but little evidence supports this and it seems only coincidental.[opinion]

All content from Kiddle encyclopedia articles (including the article images and facts) can be freely used under Attribution-ShareAlike license, unless stated otherwise. Cite this article:
Dredge oyster Facts for Kids. Kiddle Encyclopedia.