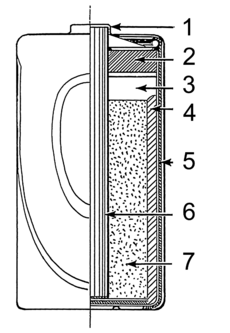 A dry cell is a type of electric battery, commonly used for portable electrical devices. It was developed in 1886 by the German scientist Carl Gassner, after development of wet zinc-carbon batteries by Georges Leclanché in 1866. The modern version was developed by Japanese Yai Sakizo in 1887.

A dry cell uses a paste electrolyte, with only enough moisture to allow current to flow. Unlike a wet cell, a dry cell can operate in any orientation without spilling, as it contains no free liquid, making it suitable for portable equipment. By comparison, the first wet cells were typically fragile glass containers with lead rods hanging from the open top and needed careful handling to avoid spillage. Lead–acid batteries did not achieve the safety and portability of the dry cell until the development of the gel battery. Wet cells have continued to be used for high-drain applications, such as starting internal combustion engines, because inhibiting the electrolyte flow tends to reduce the current capability.

A common dry cell is the zinc-carbon cell, sometimes called the dry Leclanché cell, with a nominal voltage of 1.5 volts, the same as the alkaline cell (since both use the same zinc–manganese dioxide combination).

Primary cells are not rechargeable and are generally disposed of after the cell's internal reaction has consumed the reactive starting chemicals.

Secondary cells are rechargeable, and may be reused multiple times.

All content from Kiddle encyclopedia articles (including the article images and facts) can be freely used under Attribution-ShareAlike license, unless stated otherwise. Cite this article:
Dry cell Facts for Kids. Kiddle Encyclopedia.