Drymarchon is a genus of large nonvenomous colubrid snakes, commonly known as indigo snakes or cribos, found in the Southeastern United States, Central America, and South America. Reaching 3 m (9.8 ft) or more in length, they are among the world's largest colubrid snakes.

Indigo snakes are large, robust snakes which can reach a total length (including tail) of over 3 m (9.8 ft). They have smooth dorsal scales, and several color variations, including a glossy blue-black color. This snake genus, Drymarchon, means "Lord of The Forest".

Indigo snakes are diurnal and actively forage for prey. They feed on a broad variety of small animals such as rodents, birds, lizards, frogs, toads, and other snakes, including rattlesnakes. They are not aggressive snakes and will only bite when threatened. Typical threat display includes hissing and shaking of its tail as a warning. 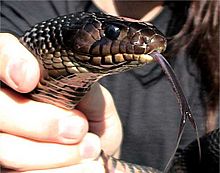 The genus Drymarchon was formerly considered to be a monotypic taxon formed by subspecies of D. corais. Currently the genus includes six distinct species recognized by ITIS: One of the species has several subspecies which are recognized as being valid.

All content from Kiddle encyclopedia articles (including the article images and facts) can be freely used under Attribution-ShareAlike license, unless stated otherwise. Cite this article:
Drymarchon Facts for Kids. Kiddle Encyclopedia.