Dubh Loch is a small upland loch situated within the Balmoral Estate, in Aberdeenshire, Scotland. It is at an altitude of 637 metres (2,090 ft), with a perimeter of 2.3 kilometres (1.4 mi), and its outflow, Allt an Dubh-loch, empties into Loch Muick approximately 2 kilometres (1.2 mi) to the southeast near the royal lodge Glas-allt-Shiel. To the southeast of the loch is the Munro Broad Cairn and to the northwest the ground slopes steeply up to Càrn a' Coire Boidheach and Lochnagar. To the west is Cairn Bannoch and over a high col to the southwest lies Loch Callater. 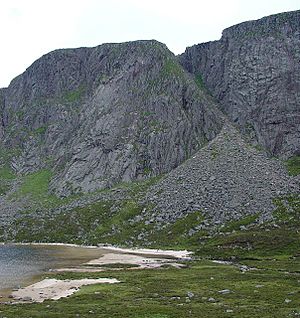 A wall of granite, Creag an Dubh Loch, rises steeply above the loch on the southeast shading the loch from the sun – hence the name "dark lake". Creag an Dubh Loch is about 1.5 kilometres (0.9 mi) long and generally about 200 metres (660 ft) high – at its highest it is 270 metres (890 ft) making it the highest continuous rock face in the Cairngorms.

The loch was a favourite spot for Queen Victoria to visit from her retreat at Glas-allt-Shiel. Once her son Alfred swam out into the loch to capture and kill a wounded stag in the water.

All content from Kiddle encyclopedia articles (including the article images and facts) can be freely used under Attribution-ShareAlike license, unless stated otherwise. Cite this article:
Dubh Loch (Glen Muick) Facts for Kids. Kiddle Encyclopedia.