Dull is a village in Perth and Kinross, Scotland. It is paired with Boring, Oregon. Bland, New South Wales, Australia, is also a member of the League of Extraordinary Communities established by Boring and Dull in 2013.

Dull is twinned with: 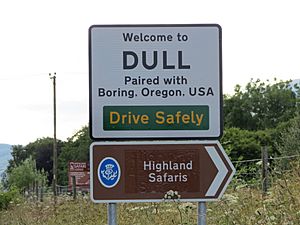 Elizabeth Leighton of Aberfeldy, Scotland, proposed the pairing while passing through Boring, Oregon (an unincorporated town on a highway from Portland, Oregon, to Mount Hood) on a cycling holiday. In June 2012, the US town of Boring, Oregon, accepted the proposal of Dull to "pair" their municipalities, in an effort to promote tourism in both places as a play on their names. The Boring Community Planning Organization issued commemorative “Boring & Dull: a pair for the ages” T-shirts and mugs, raffling off a trip to Dull, Scotland. The Boring CPO will not be attempting to get the pairing recognised by the US-based Sister Cities International.

Bland Shire, West Wyalong—a farm community and former gold prospecting site in the Riverina region of New South Wales, Australia—joined the initiative in 2013, creating not a "twinned town" relationship but a "League of Extraordinary Communities" to group Dull, Boring and Bland as a means of encouraging travel, promoting all three communities.

All content from Kiddle encyclopedia articles (including the article images and facts) can be freely used under Attribution-ShareAlike license, unless stated otherwise. Cite this article:
Dull, Perth and Kinross Facts for Kids. Kiddle Encyclopedia.