Aberfeldy (Scottish Gaelic: Obar Pheallaidh) is a burgh in Perth and Kinross, Scotland, on the River Tay. A small market town, Aberfeldy is located in Highland Perthshire and at the 2001 census had a population of about 1,895. It is also mentioned in a well-known poem by Robert Burns.

Beyond its association with Burns, who mentioned Aberfeldy in his poem The Birks of Aberfeldy, the town is known for "Wade's Bridge", built in 1733 and designed by architect William Adam, father of the more famous Robert Adam. General Wade considered this bridge to be his greatest accomplishment. Aberfeldy is also mentioned in the traditional Loch Tay Boat Song.

The town also includes a memorial to the Black Watch, an 18-hole golf course, a children's park, and a town square that features stores, restaurants and art galleries. In 2002, Aberfeldy was granted Fairtrade Town status, which was renewed by the Fairtrade Foundation on 15 December 2003.

The Aberfeldy Footbridge over the River Tay is constructed entirely of composite materials. It connects two holes of the town's golf course on either side of the River Tay.

Breadalbane Cricket Club, founded in 1869, play home matches at Victoria Park in Aberfeldy. The team are the Perthshire Cup Winners for 2007 and 2008, and Strathmore Cricket Union Division One Champions in 2006 and 2008. 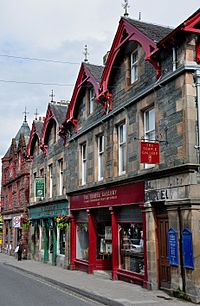 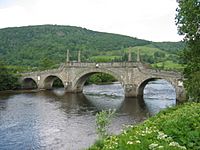 Wade's Bridge over the Tay

The derelict Birks Cinema, since renovated and reopenend

Aberfeldy is situated in Strath Tay on the upper reaches of the River Tay, which begins up-strath from Aberfeldy at Loch Tay and carries on south and east from Aberfeldy until it discharges at its estuary east of Perth at the Firth of Tay. Lying in a u-shaped strath common to Scotland's glaciated landscape, the terrain in and around Aberfeldy is gently undulating. Farming and agriculture border the town in the strath. Areas further outside of Aberfeldy (particularly to the north and west) give way to the extensive Grampian Mountains, with scenic peaks such as Creag Odhar, Farragon (780 m), Schiehallion (1083 m), Ben Lawers (1214 m) and Sron Mhor punctuating the landscape.

Aberfeldy lies at the intersection of two A roads, the A826 to Crieff and the A827, which leads east and south towards the main A9 trunk road. Aberfeldy is easily reached from southern locations by taking the A9 to the Ballinluig exit, then the A827 to get to the town. Owing to its location off the A9 trunk road, Aberfeldy is less geared toward tourists than its cousin Pitlochry.

From July 1865 until May 1965, the town was served by a Highland Railway branch from Ballinluig. Although most of the trackbed leading into the town is still extant, the site of the station has vanished under modern housing developments.

The entrance to the Birks of Aberfeldy – a well known gorge and scenic walk – lies on the southern outskirts of Aberfeldy on the A826. The Birks is classified as a "Site of Special Scientific Interest" and contains many varieties of flora and fauna, some of which are protected. Glen Lyon, widely regarded as one of Scotland's most stunning and least-visited glens, lies about 8 kilometres from the outskirts of Aberfeldy. Evidence of fort construction by Roman legions several thousand years ago exists to this day, further evidence of the region's historical as well as geographical relevance. At the mouth of Glen Lyon lies the village of Fortingall, legendary birthplace of Pontius Pilate and home to the Fortingall Yew Tree, reputed to be more than 5,000 years old (though recent research suggests its age to be closer to 2,500).

Education, culture and the arts

Aberfeldy has a brand new primary and secondary school called Breadalbane Academy that opened in December 2010.

Aberfeldy Parish Church meets in the former Breadalbane Church building in Taybridge Road, which was the first new building of the Free Church after the Disruption in 1843. It reunited with the former parish church, St Andrew's in Crieff Road, built in 1884, and for a while was used as halls for the united congregation, until 2005 when the Crieff Road building was closed and a modern interior and suite of halls was added to the Taybridge Road building, providing excellent facilities for adult and youth work. There is also a Roman Catholic church in Home Street. The buildings formerly used as Congregational, Free, and Episcopal churches are now all used for other purposes. Jehovah's Witnesses meet in the local Kingdom Hall.

Aberfeldy does not have a theatre or a music hall. However it does have two community venues, used regularly for music and drama, in the Town Hall and the Locus Centre. These are managed by Locus Breadalbane, a community charity. The nearest venues are the Pitlochry Festival Theatre, the Perth Theatre or the Perth Concert Hall. The new Community School has an auditorium.

The Birks Cinema, built in the very heart of the town in 1939 in a late Art Deco style, closed in the early 1980s for lack of business. It then turned into an amusement hall, for which purpose the entire interior was demolished. The amusement hall closed in 2004 and the building stood as an empty shell for several years. In 2009 it was bought by the "Friends of the Birks" with a grant from the Scottish Government’s Town Centre Regeneration Fund with plans to refurbish and reopen as a new 92-seat cinema and café-bar. The Friends are now a formal company limited by guarantee and registered as a charity, with Charlotte Flower heading up a board of trustees. In spring 2011, the Birks project was awarded £658,520 by the Scotland Rural Development Programme - half the sum needed to carry out the building work. Match funding for the SRDP grant has now been raised - notably through a Big Lottery grant of £539,950 announced on Feb 9 2012. Building work began in April 2012 and opened in Spring 2013 http://www.birkscinema.co.uk/. The patron of the project is the actor Alan Cumming, who was born in the town.

Aberfeldy is the location of the poem "The Birks of Aberfeldy" by Robert Burns:

Now Simmer blinks on flowery braes,
And o'er the crystal streamlets plays;
Come let us spend the lightsome days,
In the birks of Aberfeldy!

In 2001, the author JK Rowling purchased the nearby 19th-century Killiechassie House, on the banks of the River Tay.

The Precambrian Dalradian geological formations in the Highlands north of Aberfeldy contain substantial deposits of the mineral baryte, which is mostly used as a weighting agent for drilling fluids to prevent blow-outs in oil and gas exploration wells. There are three locations with exploitable quantities of it. The Foss Mine, some 4 miles (6 km) NW of Aberfeldy at 56°40′1.47″N 3°56′5.21″W﻿ / ﻿56.6670750°N 3.9347806°W﻿ / 56.6670750; -3.9347806 has been operational since 1984 and production averages 50,000 tonnes per annum. So far some 525,000 tonnes have been extracted there by M-I SWACO. In 1990, a locally based company began opencast extraction near the summit of Ben Eagach, 4 miles (6 km) due north of Aberfeldy. Approximately 25,000 tonnes were mined from a series of small pits which have now been abandoned.

The largest formation, containing a 7.5-million-tonne reserve is at Duntanlich, some 6 miles (10 km) due north of Aberfeldy, south of Loch Tummel. In 1994 an application by MI Great Britain Ltd for an underground operation to mine the deposits was turned down. In 2000, M I Drilling Fluids UK unfolded new plans to establish a mine at Duntanlich to take six million tonnes from the deposit over the next 50 years) and began preliminary talks with Perth & Kinross Council and Scottish Natural Heritage. However, it was decided at that time not to take these proposals forward.

Aberfeldie, the suburb of Melbourne, Victoria, Australia was named, indirectly, after the town, as was the locality of Aberfeldy, Victoria.

All content from Kiddle encyclopedia articles (including the article images and facts) can be freely used under Attribution-ShareAlike license, unless stated otherwise. Cite this article:
Aberfeldy, Perth and Kinross Facts for Kids. Kiddle Encyclopedia.