Mahonia nervosa, commonly known as dwarf Oregon-grape, Cascade barberry, Cascade Oregon-grape, or dull Oregon-grape, is a flowering plant native to the northwest coast of North America from southern British Columbia south to central California, with an isolated population inland in northern Idaho. It is especially common in second growth, Douglas-fir or western redcedar forests, making use of those pools of sunlight that intermittently reach the ground.

Some authors place the entire genus Mahonia within the genus Berberis.

The plant was collected by Lewis and Clark during their famous expedition to the West before being described for science in 1813. 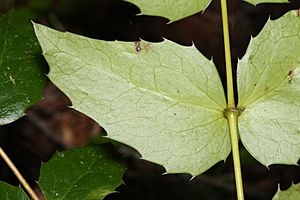 Lower surface of leaf, palmately nerved with 3 to 8 veins

It is an evergreen shrub with short vertical stems, mostly under 30 cm (12 in), while the leaves reach higher, rarely up to 2 m (6 ft 7 in) tall. The leaves are compound, with 9–19 leaflets; each leaflet is strongly toothed, reminiscent of holly, and somewhat shiny, but less so than tall Oregon-grape. The leaflets do not have a single central vein as in that species, but several veins arranged fan-like, branched from the leaflet base, hence the epithet nervosa. The flowers and fruit are like those of other Oregon-grapes, and are equally sour-tasting.

Some Plateau Indian tribes drank an infusion of the root to treat rheumatism. The Yana people dried and ground the fruits to make a mush. They can also be dried and eaten like raisins.

All content from Kiddle encyclopedia articles (including the article images and facts) can be freely used under Attribution-ShareAlike license, unless stated otherwise. Cite this article:
Dwarf Oregon-grape Facts for Kids. Kiddle Encyclopedia.