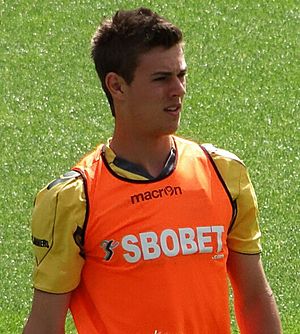 Dylan James Tombides (8 March 1994 – 18 April 2014) was an Australian association footballer. He played as a striker for West Ham United and the Australia U17 and Australia U23 teams. He was born in Perth, Western Australia.

Tombides made his professional debut for West Ham on 25 September 2012 in a 4–1 home defeat to Wigan Athletic in the League Cup. He came on as an 84th-minute substitute for Gary O'Neil.

Tombides died from testicular cancer on 18 April 2014 in London, England. He was 20.

All content from Kiddle encyclopedia articles (including the article images and facts) can be freely used under Attribution-ShareAlike license, unless stated otherwise. Cite this article:
Dylan Tombides Facts for Kids. Kiddle Encyclopedia.