Kids Encyclopedia Facts
Not to be confused with Cheez Whiz. 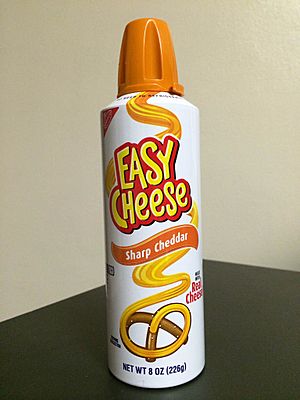 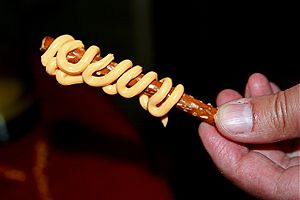 Easy Cheese on a pretzel

Easy Cheese is the trademark for a processed cheese spread product distributed by Mondelēz International. It is also referred to as aerosol cheese, spray cheese, cheese fizz, or simply cheese in a can, and is similar to squeeze cheese (a semi-solid cheesefood from the 1970s packaged in a squeezable plastic tube). Easy Cheese is packaged in a metal can filled with air covered with a plastic cap that reveals a straight, flexible nozzle where the cheese is extruded.

The product was first manufactured and marketed by Nabisco in 1965 under the name Snack Mate until 1984. Advertisements often displayed the orange product adorned in flowy peaks atop several different types of hors d'oeuvres. As a 1966 advertisement says, it was "instant cheese for instant parties." Easy Cheese is currently available in Cheddar, Sharp Cheddar, Cheddar 'n Bacon, and American flavors. Discontinued varieties include Pimento, French Onion, Cheddar Blue Cheese, Shrimp Cocktail, Nacho, and Pizza.

Water plays a multitude of functions in Easy Cheese. First, it allows for more stable emulsion, serving as a medium for the hydrophilic moieties of chelating salts. More specially, chelating salts bind calcium ions to hydrate proteins and create a more uniform spread. Water also provides the moisture content needed in processed cheese spreads to achieve the desired texture. Excessive water, however, can result in a lack of viscosity resulting in a cheese spread that has more liquid than solid properties after passing through the plastic extruder. The addition of too much water may likewise increase the product’s susceptibility to microbial growth.

Easy Cheese is an oil-in-water emulsion. Oil droplets typically have a diameter of no more than one micrometer. Emulsions with large droplets like this tend to have a low-medium viscosity in comparison to smaller droplets whose emulsions have a higher viscosity. Heating the cheese mixture causes separation of the fats and protein of the cheese emulsion from destabilization. Emulsifying agents are made up of amphiphilic molecules that act as an interface to reduce the surface tension between hydrophilic and hydrophobic molecules of the product to result in a uniform cheese spread that does not separate during storage. Cheese proteins that have denatured during processing are reestablished using melting salts. Sodium citrate and sodium phosphate are the main emulsifiers used in Easy Cheese to sequester calcium in cheddar cheese. This occurrence hydrates and solubilizes the casein, causing it to swell with water. The addition of these salts contributes to the uniformly creamy consistency of Easy Cheese.

The key role of emulsifying agents in Easy Cheese is to create a uniform cheese spread by altering the structure of casein micelles in the cheese. Casein micelles have a diameter ranging from 15–20 nanometers and are composed of flexible aggregates alpha-, beta-, and kappa-casein. The alpha- and beta-casein are kept in place by “colloidal calcium phosphate-mediated cross links” covered with a kappa-casein outer layer. The outer layer on the casein’s surface has glycosylated hydrophilic tails that are negatively charged and is stable in solution due to Van der Waals interactions. All of the negative charges causes the casein micelles to initially repel each other and provides stability to the matrix by protecting the alpha- and beta-caseins.

When the group of casein micelles are exposed to heat and shearing forces, kappa-casein is cleaved causing the displacement of the glycosylated hydrophilic tails. The casein micelle becomes destabilized as alpha and beta-casein are now exposed to the environment. Emulsifying agents such as sodium phosphate play an important role in stabilizing the newly destabilized structure. The hydrophilic portion of sodium phosphate removes calcium from the calcium paracaseinate from ion exchange reactions. This action causes “hydration and partial dispersion of the calcium-paracaseinate phosphate network." The hydration process increases the solubility of the protein. Sodium phosphate removes calcium from the Ca-paracaseinate cheese complex due to ion exchange interactions, where positive calcium ions bind to the negative phosphate groups. Phosphate and citrate anions can then bind to the protein structure, converting calcium-paracaseinate converts to water-soluble sodium-paracaseinate. Upon cooling, the partially dispersed matrix forms a gel-like network that gives rise to the textural properties of the final product.

The interactions between proteins and carbohydrates play an important role in the viscosity of processed spreads. More specifically, sodium alginate contributes to the integrity of the gel-like network formed by the casein and salts. The newly formed network is made possible through cation binding, which converts the hydrophilic sodium alginate into hydrophobic calcium alginate (Ma). Guluronic acid residues that are linked together demonstrate a high affinity for calcium ions. Sodium alginate works in conjunction with the destabilization of the casein micelle where calcium ions can interact with guluronic chains (Ma). Due to a mixture of these interactions, a gel-like structure is formed rather than a true gel structure.

Whey products in processed cheese spreads increases the viscosity of the overall product due to the “intermolecular interactions between adjacent protein molecules with the formation of weak transient networks” formed from the conglomerate cheese mass. The protein concentration within the cheese matrix is directly proportional to the viscosity of the solution due to their interactions with hydrated protein molecules. Therefore, the continuous phase of the oil-in-water emulsion has a greater contribution to the viscosity of the cheese product over than the discontinuous phase.

Easy Cheese exhibits pseudoplastic behaviors during extrusion of the product, which can be represented using the Herschel-Bulkley Model:

This power law model represents a type of non-Newtonian fluid relating shear rate and shear stress with viscosity. As cheese is pushed out of the can shear rate increases causing a decrease in viscosity and higher flow rates of the material. In this case, the cheese behaves more as a fluid. After it is expelled, there is no more shear rate and the cheese retains its original higher viscosity. Here, the cheese behaves like a solid. Easy Cheese must provide a smooth uniform texture whilst maintaining its viscoelastic structure to maintain its shape after extrusion from the can.

Sodium alginate is the one of the main ingredients that is responsible for Easy Cheese's pseudoplastic characteristics. More specifically, it contributes to the integrity of the gel-like network formed by the casein and salts. The newly formed network is made possible through cation binding, which converts the hydrophilic sodium alginate into hydrophobic calcium alginate. Guluronic acid residues that are linked together demonstrate a high affinity for calcium ions. Sodium alginate works in conjunction with the destabilization of the casein micelle where calcium ions can interact with guluronic chains. Due to a mixture of these interactions, a gel-like structure is formed rather than a true gel structure. About 0.05–0.5% weight by volume of sodium alginate at a 5.4–5.7 range must be added to the cheese mixture to exhibit these properties during extrusion.

Although sometimes called “aerosol cheese”, its container is not actually an aerosol spray can, because the cheese does not usually combine with a propellant (such as nitrogen) to turn into a fine mist upon being sprayed. Rather, the can contains a piston and a barrier plastic cap which squeezes the cheese through the nozzle in a solid column when the nozzle is pressed and the propellant expands in volume. The propellant does not mix with the cheese. Normal aerosol cans are charged with all of their contents through the single opening at the top, but spray cheese cans are separately charged with the product through the top and propellant through the bottom. This explains why the can has a small rubber plug on its base. The can design also ensures that the cheese can be dispensed with the can upright or inverted.

All content from Kiddle encyclopedia articles (including the article images and facts) can be freely used under Attribution-ShareAlike license, unless stated otherwise. Cite this article:
Easy Cheese Facts for Kids. Kiddle Encyclopedia.