Ebenezer, also known as New Ebenezer, is a ghost town in Effingham County, Georgia, United States, along the banks of Ebenezer Creek. It was listed on the U.S. National Register of Historic Places as Ebenezer Townsite and Jerusalem Lutheran Church in 1974. 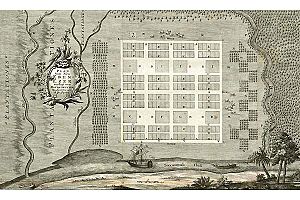 The town was established in 1734 by about 150 Salzburger emigrants, Protestant refugees who had been expelled from the Catholic Archbishopric of Salzburg (in present-day Austria) by a 1731 edict of Prince-archbishop Count Leopold Anton von Firmian. With the consent of governor James Oglethorpe, New Ebenezer was moved closer to the Savannah River in 1736, and at its new location many silk mills were opened. The Salzburgers' pastor, the Reverend Johann Martin Boltzius, sought to build "a religious utopia on the Georgia frontier." That idea was very successful for a time, and the economy thrived. Jerusalem Lutheran Church was completed in 1769, and is the fourth-oldest building in Georgia.

But, after the British invasion of 1778 during the American Revolutionary War, the town was severely damaged. It never fully recovered, although it briefly served as the capital of Georgia in 1782. It was made the county seat of Effingham County in 1797, but two years later the seat was transferred to Springfield, taking much county business with it. By the time Ebenezer was abandoned in 1855, the town covered only 1/4 square mile. The Jerusalem Evangelical Lutheran Church is one of the few buildings that has survived in Ebenezer, and is believed to have the oldest continuing congregation in the state.

The Ebenezer Townsite and Jerusalem Lutheran Church were listed on the National Register of Historic Places on December 4, 1974. The New Ebenezer Camp, established 1977, is located in former Ebenezer. In 1987, the LAMAR Institute began an archaeological study of Ebenezer. Several reports from its researchers are available online at the institute's website.

One of the more notable people from Ebenezer was John Adam Treutlen, the first state governor of Georgia.

All content from Kiddle encyclopedia articles (including the article images and facts) can be freely used under Attribution-ShareAlike license, unless stated otherwise. Cite this article:
Ebenezer, Georgia Facts for Kids. Kiddle Encyclopedia.