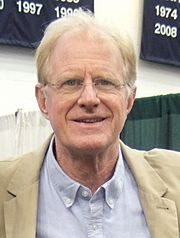 Edward James "Ed" Begley, Jr. (born September 16, 1949) is an American movie, television, stage, and voice actor and environmentalist. He is known for his roles in; She-Devil, What's Your Number?, Whatever Works, and in Living with Ed. He is also known for his television role in St. Elsewhere.

All content from Kiddle encyclopedia articles (including the article images and facts) can be freely used under Attribution-ShareAlike license, unless stated otherwise. Cite this article:
Ed Begley, Jr. Facts for Kids. Kiddle Encyclopedia.