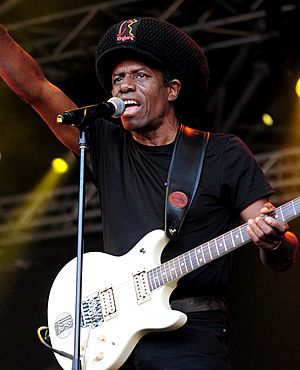 Edmond Montague "Eddy" Grant (born 5 March 1948) is a Guyanese-born British musician. He was a founding member of The Equals, one of the United Kingdom's first racially united music groups. He left the group in 1971. He is also known for a successful solo career that includes the platinum funk single "Electric Avenue" and the reggae song "I Don't Wanna Dance".

Grant was born in Plaisance, British Guiana (now Guyana). His younger brother, Rudy, is a reggae musician. In 1960, he moved to London to live with his parents.

All content from Kiddle encyclopedia articles (including the article images and facts) can be freely used under Attribution-ShareAlike license, unless stated otherwise. Cite this article:
Eddy Grant Facts for Kids. Kiddle Encyclopedia.