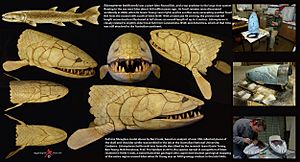 Edenopteron is a genus of large tristichopterid fish from the Late Devonian (Famennian) of what is now southeastern Australia. It is known from a single specimen of a single species, E. keithcrooki, described in 2013. 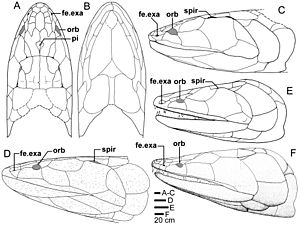 Edenopteron keithcrooki is known from remains excavated from the Worange Point Formation, near the town of Eden on the coast of New South Wales in 2008. The species name is a combination of the name Eden and pteron, meaning wing or fin in Greek. The specific name honors Dr. Keith Crook of the Australian National University for his discovery of several fossil sites in New South Wales and his key role in helping to map the geology around Eden.

The holotype consists of numerous semi-articulated remains, including an incomplete skull roof, snout, palate, cheeks, lower jaws and associated dermal bones, a left shoulder girdle, and assorted scales. Reconstructions suggest a skull length of 30 cm (12 in) and lower jaw length of about 48 cm (19 in). The endoskeleton shows a large or complete lack of ossification. The orbits (eye-sockets) are somewhat triangular rather than oval-shaped. Edenopteron possessed dentary fangs and premaxillary tusks, which are presumed to be derived traits for other large tristichopterids. By comparison to body size ratios of other tristichopterid fishes (e.g. Eusthenodon, Langlieria, Mandageria), the body length of Edenopteron is estimated at 2.9—3.2 m (9.5—10.5 ft). Additional fossil material may be described in the future: according to lead researcher Gavin Young, quoted in the Canberra Times: "We know that part of the pectoral girdle is still in the rock, so if we can lift up a few more blocks, we might find that the body is actually preserved in the rock."

Edenopteron is assigned to the Gondwanan tristichopterid subfamily Mandageriinae due to similarities shared with Cabonnichthys and Mandageria, including paired vomers in the palate, submandibular bones overlapping ventral jaw margin, and scales ornamented with widely-spaced grooves.

All content from Kiddle encyclopedia articles (including the article images and facts) can be freely used under Attribution-ShareAlike license, unless stated otherwise. Cite this article:
Edenopteron Facts for Kids. Kiddle Encyclopedia.