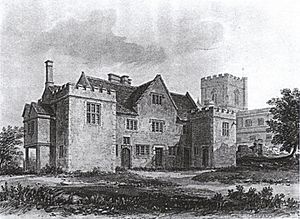 Edington Priory in Wiltshire, England, was founded by William Edington, the bishop of Winchester, in 1351 in his home village of Edington, about 3 3⁄4 miles (6 km) east of the town of Westbury. The priory church was consecrated in 1361 and continues in use as the parish church of Saint Mary, Saint Katharine and All Saints.

When Edington was recorded in Domesday Book of 1086 it was held by Romsey Abbey. There was almost certainly a church from before that time, although the earliest record is from 1241. Remains of a late-Norman church were found during restoration in the 19th century. North Bradley was a chapelry of Edington at this time.

William Edington (d. 1366), from an Edington family, became Treasurer of England and bishop of Winchester, and founded a chantry at Edington in 1351 in order to have prayers said for himself, his parents and his brother. The church was transferred from Romsey to the chantry, and William gave further funds and properties in the following years.

In 1358 the chantry became a house of the Brothers of Penitence or Bonhommes, an Augustinian order. The establishment was modelled on Ashridge Priory, the order's first house in England. The chantry's property was transferred to the new foundation and William, with others, added many manors to its wealth until his death in 1366.

The first rector, brought from Ashridge, was John de Aylesbury. At the time of his death in 1382 the brethren were eighteen in number.

During Jack Cade's rebellion in 1450, William Ayscough, Bishop of Salisbury and confessor to Henry VI, was forced to flee Salisbury. Seeking refuge in the church at Edington, he was discovered on 29 June, dragged from the high altar during mass and murdered in the fields outside the church.

Little is known of the monastery's history until the Dissolution: the house was surrendered in 1539 and in 1541 most of its estates were obtained by Sir Thomas Seymour.

The site of the monastery, north and northeast of the parish church, is a scheduled ancient monument. Besides the church, five surviving structures are recognised by Historic England; all except the fishpond are Grade I listed.

Immediately north of the church, a late medieval house which may incorporate parts of the monastic buildings. Rebuilt 1600, later alterations.

North and east of the church, two large rectangular gardens enclosed by walls approximately 3-4 metres high, probably from the monastery, altered early 17th century. One wall has cylindrical piers which may be the remains of a cloister.

Northeast of the church, on the road which leads to Steeple Ashton. A cottage named The Monastery Garden, possibly 16th century, built into a stretch of wall which may have monastic origins.

A large rectangular fishpond, north of the church, which may be monastic in origin. Other adjacent ponds have been filled in. 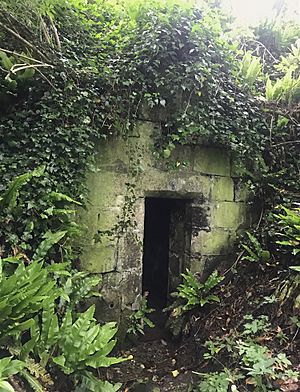 About 400 metres southwest of the church, a small 14th-century building over the Ladywell spring, with stone water troughs. A conduit carried water to the monastery.

The church still stands today, a good example of the transition between the decorated and perpendicular style of church-building. Pevsner writes "A wonderful church and a highly important church. It is so varied in its skyline and so freely embattled that it looks like a fortified mansion ...".

The whole 14th-century church survives, with its interior enhanced in the 17th century, and restoration by Charles Edward Ponting in 1888–91. It was listed as Grade I in 1968.

The church has medieval glass and contains the burial monuments of several local notables, including tombs removed from St Giles at Imber during the early 1950s, following the evacuation of that village in 1943.

In 2014 a new organ by Harrison & Harrison was installed.

Every August since 1956 a festival of church music, the Edington Festival of Music within the Liturgy, is held here.

All content from Kiddle encyclopedia articles (including the article images and facts) can be freely used under Attribution-ShareAlike license, unless stated otherwise. Cite this article:
Edington Priory Facts for Kids. Kiddle Encyclopedia.