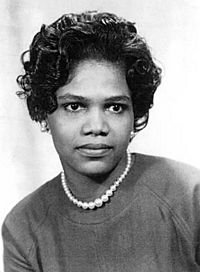 Edith Irby Jones (December 23, 1927 – July 15, 2019) was an American physician. She was born in Conway, Arkansas. Jones was the first African American to be accepted as a non-segregated student at the University of Arkansas Medical School. She was also the first black student to attend racially mixed classes in the American South.

Jones was the first woman president of the National Medical Association. She was added into the Arkansas Women's Hall of Fame.

All content from Kiddle encyclopedia articles (including the article images and facts) can be freely used under Attribution-ShareAlike license, unless stated otherwise. Cite this article:
Edith Irby Jones Facts for Kids. Kiddle Encyclopedia.