Education in Tasmania facts for kids

The education system in Tasmania comprises two tertiary education institutions; the government run K-12 schooling system, and numerous independent private schools and colleges, most of which are controlled or sponsored by religious organisations. Public education in Tasmania is managed primarily by the State Government's Department of Education. The Department is responsible for all aspects of education in Tasmania including schooling, Adult Education, the State Library and TasTAFE, a vocational tertiary institution with many campuses around the state.

See Education in Australia for an overview of the national system. 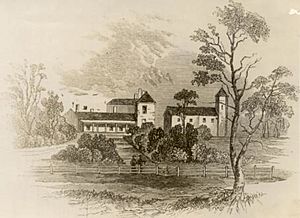 The oldest tertiary institution to be founded in Australia was the theological school Christ College in Bishopsbourne, Tasmania, in 1846. Today Christ College is a residential college of the University of Tasmania, which was founded in 1890, making the university the fourth oldest in the country.

All content from Kiddle encyclopedia articles (including the article images and facts) can be freely used under Attribution-ShareAlike license, unless stated otherwise. Cite this article:
Education in Tasmania Facts for Kids. Kiddle Encyclopedia.