Edward Leonard King (December 5, 1873 – December 27, 1933) was an American football player and coach and officer in the United States Army. He played college football as the halfback at the United States Military Academy from 1894 to 1895 and served as the head coach of the Army football team in 1903. King was a career military officer who served in the Spanish–American War and World War I. He was the Commandant of the United States Army Command and General Staff College from 1925 to 1929 and attained the rank of Major General.

King was born in Bridgewater, Massachusetts in 1873 and entered the United States Military Academy at West Point, New York in 1892. He played at the halfback position for the Army Black Knights football team from 1894 to 1895. He was also selected captain of the Army football team in 1895. Football historian Parke H. Davis later wrote of King:

Of his foot ball days he is remembered as a swift, elusive, crashing and flashing back; courageous, tenacious and chivalrous; a true soldier of the gridiron as he was of the real battle-fields.

After graduating from West Point in 1896, King was commissioned as a lieutenant and served in the Spanish–American War. He was awarded the Distinguished Service Cross for service in the Philippines in 1899. The commendation he received with the Distinguished Service Cross stated: "For extraordinary heroism in action near Imus, Cayite Province, Philippine Islands, October 6, 1899, while serving as Captain, United States Cavalry. His great personal bravery in disarming a hostile Filipino saved the life of a brother officer."

In 1903, King returned to West Point and served one year as the head coach of the Army football team. He led the team to a 6–2–1 record in the 1903 college football season. He also served in the Philippine–American War and served again in the Philippines from January 1910 through June 1912. 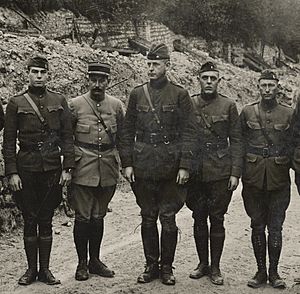 Brigadier General King (center) as commander of the 65th brigade with his staff officers in November 1918 near Mouilly.

In July 1916 he was promoted to Major of the cavalry, and he attended the Army War College from September 1916 to May 1917. Following the United States entry into World War I, King was promoted to the rank of Colonel in the National Army. He was the Chief of Staff of the 28th Infantry Division, known as the "Keystoners," in Camp Hancock, Georgia, and also during part of its campaign in France. He arrived in Europe in May 1918 and was promoted to the rank of Brigadier General in June 1918. He participated in the Marne offensive and counter-offensive starting July 15, 1918, and assumed command the 65th Infantry Brigade on July 31, 1918. He led the 65th Infantry in the battles of the Somme and Meuse-Argonne. He remained with the Army of Occupation in Luxemburg from December 1918 to April 1919 and returned to the United States in 1919.

For his service in World War I, King received the Distinguished Service Medal, and France awarded him the Croix de Guerre with palm and made him an officer in the French Legion of Honor. The citation for his Distinguished Service Medal stated: "For exceptionally distinguished and meritorious service. He served with marked distinction as Chief of Staff of the 28th Infantry Division. Later, as brigadier commander he planned and directed the operations resulting in the capture by the 65th Infantry Brigade of Chateau d'Aulnois and Marcheville, where he displayed great tactical skill and demonstrated his abilities as a commander."

From July 1925 to July 1929, Brigadier General King served as the Commandant of the United States Army Command and General Staff College at Fort Leavenworth, Kansas.

He married his wife, Nancy Vose Sumner, in 1898; they had one daughter.

In December 1933, King died of a heart attack while on a hunt at Fort McPherson, Georgia. He was buried at West Point.

All content from Kiddle encyclopedia articles (including the article images and facts) can be freely used under Attribution-ShareAlike license, unless stated otherwise. Cite this article:
Edward Leonard King Facts for Kids. Kiddle Encyclopedia.