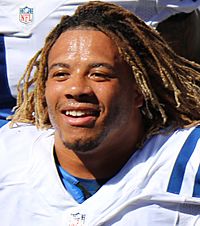 Edwin Joseph Jackson (December 19, 1991 – February 4, 2018) was an American football linebacker. He was born in Atlanta, Georgia. He played college football at Georgia Southern University. He signed with the Arizona Cardinals of the National Football League (NFL) as an undrafted free agent in 2015. He then spent two seasons with the Indianapolis Colts from 2015 to 2017.

On September 2, 2017, Jackson was placed on injured reserve.

On February 4, 2018, Jackson was riding an Uber in Indianapolis, Indiana and asked the driver to pull over because he felt ill. While standing near the interstate, a drunk driver hit and killed Jackson and the Uber driver. Jackson was 26 years old.

All content from Kiddle encyclopedia articles (including the article images and facts) can be freely used under Attribution-ShareAlike license, unless stated otherwise. Cite this article:
Edwin Jackson (American football) Facts for Kids. Kiddle Encyclopedia.