Egernia is a genus of skinks (family Scincidae) that occurs in Australia. These skinks are ecologically diverse omnivores that inhabit a wide range of habitats. However, in the loose delimitation (which incorporates about 30 species) the genus is not monophyletic but an evolutionary grade, as has long been suspected due to its lack of characteristic apomorphies.

Some of the skinks traditionally placed in Egernia appear to be among the most intelligent squamates. They have been shown to be able to distinguish between relatives and unrelated conspecifics, and can recognize relatives individually. Several species form monogamous pair-bonds. Most of these species belong to Egernia sensu stricto, and similar behaviour is also known in the related Solomon Islands skink (Corucia zebrata). The latter means that the high intelligence and social skills are probably plesiomorphic for the Egernia genus-group as a whole, and that the solitary species appear to have evolved towards being less intelligent and social again. It may still be, however, that the intelligent behaviour is a homoplasy that evolved several times in the Egernia genus-group; the fact that Corucia is a monotypic and rather distinct genus makes it impossible to decide at present.

It is the namesake genus of the Egernia genus-group, which also includes the Solomon Islands skink (Corucia), Cyclodomorphus and the blue-tongued skinks (Tiliqua). In some older works, it is considered closely related to Mabuya, but even among the subfamily Lygosominae this genus does not seem to be particularly closely related and would—were the genus-groups treated at the rarely used rank of infrafamily—certainly constitute an infrafamily of its own. On the other hand, the enigmatic crocodile skinks (Tribolonotus) might be a very basal member of the Egernia genus-group.

The genus Egernia proper, as well as the other lineages, appear to be of Miocene—probably Early Miocene—origin, meaning they radiated at least 15, maybe 20 million years ago (mya). There are fossils of Egernia-like Lygosominae from around the Oligocene-Miocene boundary 23 mya, but these cannot be assigned to the present genus with certainty. Rather, they appear to be basal members of the Egernia genus-group, still very plesiomorphic Lygosominae with a habitus similar to Mabuya. 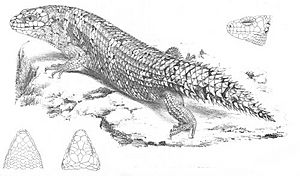 Stokes's skink (E. stokesii) is a large species of the "typical" clade

Nota bene: A binomial authority in parentheses indicates that the species was originally described in a genus other than Egernia.

All content from Kiddle encyclopedia articles (including the article images and facts) can be freely used under Attribution-ShareAlike license, unless stated otherwise. Cite this article:
Egernia Facts for Kids. Kiddle Encyclopedia.