King's skink (Egernia kingii) is a species of skink, a lizard in the family Scincidae. The species is endemic to Australia.

The specific name, kingii, is in honor of Australian Phillip Parker King, who explored the coast of Australia while he was an officer in the Royal Navy.

King's skink is native to coastal regions of south-western Australia. It is common on Rottnest Island and Penguin Island and some coastal areas with open forest and open heath.

King's skink is a large, heavy-bodied black skink that can reach a total length (including tail) of 55 centimetres (22 in) with a mass of 220 grams (8 oz).

King's skink is omnivorous and consumes mostly softer plant matter from the range of local vegetation, but supplements its diet with insects and birds' eggs.

King's skink is prey for many animals including tiger snakes (Notechis spp.).

A traditional name for King's skink is wandy, given by the Nyungar people of south-west Western Australia. The first European to draw a King's skink was the artist and naturalist Ferdinand Bauer who made a detailed drawing of one during Flinders' expedition in 1801.

Like many skinks, King's skink is viviparous, and after a gestation period of 20–22 weeks, gives birth to litters of 2–8 young that have a typical mass of 7 grams (0.25 oz). Juvenile mortality is high and growth to adult size is slow, so mature King's skinks can be quite long lived. 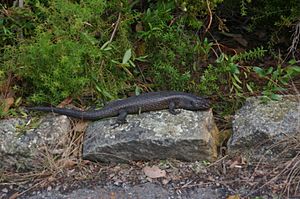 All content from Kiddle encyclopedia articles (including the article images and facts) can be freely used under Attribution-ShareAlike license, unless stated otherwise. Cite this article:
King's skink Facts for Kids. Kiddle Encyclopedia.