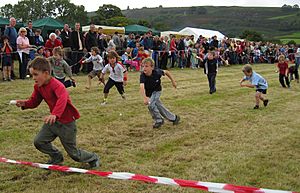 An egg-and-spoon race is a sporting event in which participants must balance an egg or similarly shaped item upon a spoon and race with it to the finishing line. At many primary schools an egg-and-spoon race is staged as part of the annual Sports Day, alongside other events such as the sack race and the three-legged race.

Competitors race either individually or in teams in the manner of a relay race. If the egg falls from the spoon then competitors may be required to stop, retrieve, and reposition their egg; or to start again; or may even be disqualified. Due to the lesser penalty imposed for dropping the egg, and consequent encouragement of greater risk-taking, the first penalty scenario may result in a race that is faster overall. Common methods of cheating include sticking the egg to the spoon, or holding onto the egg with one finger. For an extra challenge, contestants might carry the spoon with both hands, with their teeth, or have their hands tied behind their backs. A variant of this sport played in India uses a lemon instead of an egg and often has the participant hold the spoon in the mouth.

In some schools the attendance of parents is prohibited or alternative non-competitive events staged, with the intention of sparing children the embarrassment and stigma of defeat. In others, the use of raw eggs is banned on the grounds of health and safety and fears of allergy or of competitors contracting salmonella through accidental ingestion of the contents of a broken egg. Hard-boiled, wooden, ceramic or synthetic eggs may be used in their stead, or alternative substitutes such as potatoes, small balls, or jelly. Punitive insurance premiums have also resulted in the cancellation of some events. The phrase "egg and spoon" features in The Concise New Partridge Dictionary of Slang and Unconventional English; its use, along with the idiom good egg with which it is sometimes confused, is frowned upon by the Metropolitan Police Service on the grounds of it being derogatory and rhyming slang for "coon".

British Olympic heptathlete and gold-medal winner Denise Lewis cites victory aged six in a thirty-metre egg-and-spoon race as the origin of her sporting ambitions; she advises all young athletes "concentrate, have fun with it and do your best".

All content from Kiddle encyclopedia articles (including the article images and facts) can be freely used under Attribution-ShareAlike license, unless stated otherwise. Cite this article:
Egg-and-spoon race Facts for Kids. Kiddle Encyclopedia.