Ejnar Mikkelsen (1880–1971), was a Danish polar explorer and author. He is most known for his expeditions to Greenland. 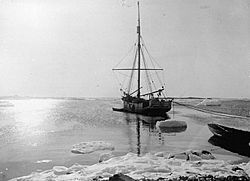 "Alabama", the ship of Mikkelsen's 1909 expedition.

He was born in Vester Brønderslev, Jutland. He served in the Georg Carl Amdrup expedition to Christian IX Land, East Greenland (1900), and in the Baldwin-Ziegler North Pole Expedition to Franz Joseph Land (1900–02).

With Ernest de Koven Leffingwell he organized the Anglo-American polar expedition which wintered off Flaxman Island, Alaska, in 1906–07. They lost their ship, but in a sledge journey over the ice they located the continental shelf of the Arctic Ocean, 65 miles (105 km) offshore, where in 2 miles (3 km) the sea increased from 50 meters (164 ft) to more than 690 meters (2264 ft) in depth.

Organizing an expedition to map out the northeast coast of Greenland, to recover the bodies of Mylius-Erichsen, leader of the ill-fated Denmark expedition and the expedition's cartographer, Niels Peter Høeg Hagen, and their records, Mikkelsen wintered 1909–10 at Shannon Island, East Greenland. His wooden ship, the Alabama, was trapped in the ice of Shannon and, while he was exploring, the rest of the party returned home on a whaler. Remaining with his engineer, Iversen, Mikkelsen succeeded by a series of hazardous sledge journeys in recovering the lost records and in disproving the existence of Peary Channel.

The two explorers returned to Shannon island to find the crew gone, but, they had salvaged timbers and planking and erected a small cottage. Mikkelsen and Iversen then spent two winters at the cottage before they were rescued, in the direst of extremities, by a Norwegian whaler in summer 1912. The so-called Alabama cottage has survived, intact, and was photographed during a visit by Danish Navy inspection ship Ejnar Mikkelsen in September 2010.

In 1924, he led an expedition to settle what later came to be Scoresbysund.

In 1932 he led the 'Second East-Greenland Expedition of the Scoresbysund Committee' that carried out the first archaeological excavations on the Skaergaard intrusion by the shores of the Kangerlussuaq Fjord.

In 1970 on his 90th birthday a national tribute was paid to him in Denmark; he died in Copenhagen a few months later on 1 May 1971.

The Ejnar Mikkelsen Range is named after him.

All content from Kiddle encyclopedia articles (including the article images and facts) can be freely used under Attribution-ShareAlike license, unless stated otherwise. Cite this article:
Ejnar Mikkelsen Facts for Kids. Kiddle Encyclopedia.