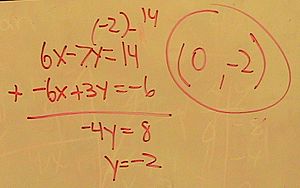 Elementary algebra is the most basic form of algebra taught to students. It is often one of the next areas of mathematics taught to students after arithmetic. While in arithmetic only numbers and operators like +, −, ×, and ÷ occur; in algebra, variables (like a, x, y) are used to stand for numbers. This is useful because:

These three are the main strands of elementary algebra. Elementary algebra is often used in many other subjects, like science, business, and building. Abstract algebra, a much more advanced topic, is generally taught late in college.

Algebraic notation describes how algebra is written. It follows certain rules and conventions, and has its own terminology. For example, the expression

has the following components: 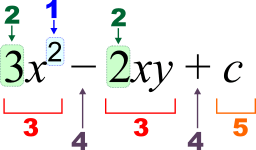 A coefficient is a numerical value, or letter representing a numerical constant, that multiplies a variable (the operator is omitted). A term is an addend or a summand, a group of coefficients, variables, constants and exponents that may be separated from the other terms by the plus and minus operators. Letters represent variables and constants. By convention, letters at the beginning of the alphabet (e.g.

) are typically used to represent constants, and those toward the end of the alphabet (e.g.

) are used to represent variables. They are usually written in italics.

Algebraic operations work in the same way as arithmetic operations, such as addition, subtraction, multiplication, division and exponentiation. and are applied to algebraic variables and terms. Multiplication symbols are usually omitted, and implied when there is no space between two variables or terms, or when a coefficient is used. For example,

Usually terms with the highest power (exponent), are written on the left, for example,

is written to the left of

. When a coefficient is one, it is usually omitted (e.g.

is always rewritten to

, being undefined, should not appear in an expression, and care should be taken in simplifying expressions in which variables may appear in exponents.

Other types of notation are used in algebraic expressions when the required formatting is not available, or can not be implied, such as where only letters and symbols are available. For example, exponents are usually formatted using superscripts, e.g.

. In plain text, and in the TeX mark-up language, the caret symbol "^" represents exponents, so

is written as "x^2". In programming languages such as Ada, Fortran, Perl, Python and Ruby, a double asterisk is used, so

is written as "x**2". Many programming languages and calculators use a single asterisk to represent the multiplication symbol, and it must be explicitly used, for example,

If an equation has only one number that is unknown it is sometimes easy to solve. The unknown number is called "x":

Dividing both sides by 2:

Elementary algebra builds on and extends arithmetic by introducing letters called variables to represent general (non-specified) numbers. This is useful for several reasons.

Algebraic expressions may be evaluated and simplified, based on the basic properties of arithmetic operations (addition, subtraction, multiplication, division and exponentiation). For example,

Animation illustrating Pythagoras' rule for a right-angle triangle, which shows the algebraic relationship between the triangle's hypotenuse, and the other two sides.
Main page: Equation

An equation states that two expressions are equal using the symbol for equality,

(the equals sign). One of the most well-known equations describes Pythagoras' law relating the length of the sides of a right angle triangle:

This equation states that

, representing the square of the length of the side that is the hypotenuse (the side opposite the right angle), is equal to the sum (addition) of the squares of the other two sides whose lengths are represented by

An equation is the claim that two expressions have the same value and are equal. Some equations are true for all values of the involved variables (such as

is true only for

. The values of the variables which make the equation true are the solutions of the equation and can be found through equation solving.

Another type of equation is an inequality. Inequalities are used to show that one side of the equation is greater, or less, than the other. The symbols used for this are:

represents 'greater than', and

represents 'less than'. Just like standard equality equations, numbers can be added, subtracted, multiplied or divided. The only exception is that when multiplying or dividing by a negative number, the inequality symbol must be flipped.

By definition, equality is an equivalence relation, meaning it has the properties (a) reflexive (i.e.

). It also satisfies the important property that if two symbols are used for equal things, then one symbol can be substituted for the other in any true statement about the first and the statement will remain true. This implies the following properties:

The relations less than

have the property of transitivity:

can be swapped, for example:

, where := means "is defined to equal", substituting 3 for

informs the reader of this statement that

means 3*3=9. Often it's not known whether the statement is true independent of the values of the terms, and substitution allows one to derive restrictions on the possible values, or show what conditions the statement holds under. For example, taking the statement x+1=0, if x is substituted with 1, this imples 1+1=2=0, which is false, which implies that if x+1=0 then x can't be 1.

Consider if the original fact were stated as "ab=0 implies a=0 or b=0." Then when we say "suppose abc=0," we have a conflict of terms when we substitute. Yet the above logic is still valid to show that if abc=0 then a=0 or b=0 or c=0 if instead of letting a=a and b=bc we substitute a for a and b for bc (and with bc=0, substituting b for a and c for b). This shows that substituting for the terms in a statement isn't always the same as letting the terms from the statement equal the substituted terms. In this situation it's clear that if we substitute an expression a into the a term of the original equation, the a substituted does not refer to the a in the statement "ab=0 implies a=0 or b=0."

All content from Kiddle encyclopedia articles (including the article images and facts) can be freely used under Attribution-ShareAlike license, unless stated otherwise. Cite this article:
Elementary algebra Facts for Kids. Kiddle Encyclopedia.