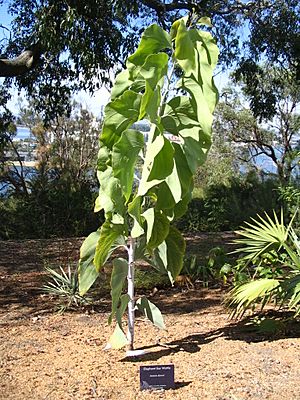 Acacia dunnii, commonly known as elephant ear wattle or Dunn's wattle, is a shrub or tree of the genus Acacia and the subgenus Plurinerves.

The species was formally described by the botanist William Bertram Turrill in 1922 in the work Dunn's Wattle as published in the Bulletin of Miscellaneous Information. Synonyms for the plant include Racosperma dunnii as described by Leslie Pedley and Acacia sericata var. dunnii by Joseph Maiden.

It is native to an area in the Northern Territory and the Kimberley region of Western Australia. Despite records for Queensland, the Commonwealth Heads of Australian Herbaria consider A dunnii not to be native to Queensland, but to have become naturalised. It grows on shallow skeletal sandy soils, over sandstone or quartzite Often found on ridges, stony hills and amongst rocks and rocky outcrops.

All content from Kiddle encyclopedia articles (including the article images and facts) can be freely used under Attribution-ShareAlike license, unless stated otherwise. Cite this article:
Elephant ear wattle Facts for Kids. Kiddle Encyclopedia.