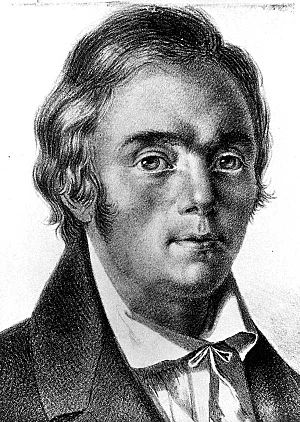 Elias Lönnrot (9 April 1802 – 19 March 1884) was a Finnish philologist. He collected traditional spoken poems and made a book of them. He made Finland's national epic, Kalevala. This is a book of traditional folk stories and poems. He collected these during several journeys across Finland, Karelia, and parts of Russia and the Baltic countries.

Lönnrot, Mikael Agricola and Aleksis Kivi are regarded fathers of a national literature in Finnish.

He born and died in Sammatti, an old town in Uusimaa.

All content from Kiddle encyclopedia articles (including the article images and facts) can be freely used under Attribution-ShareAlike license, unless stated otherwise. Cite this article:
Elias Lönnrot Facts for Kids. Kiddle Encyclopedia.