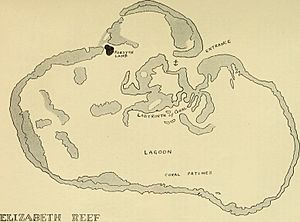 It is the southernmost coral atoll in the world and one of the southernmost platform reefs in the world. It measures 8.2 km by 5.5 km. Despite the relatively high latitude, a wide variety of flora and fauna exists on the reef and in the surrounding waters due to their location where tropical and temperate ocean currents converge. 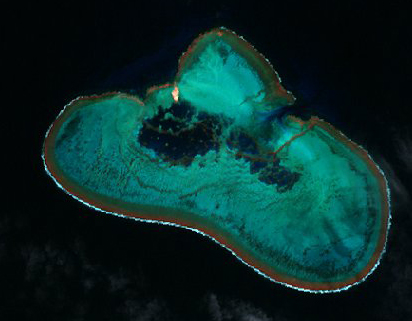 Surveys by the Australian Institute of Marine Science have highlighted a healthy number of black cod Epinephelus daemelii, a threatened species in New South Welsh waters. The survey in 2003 highlighted 111 species of coral and identified 181 species of fish. The total number of recorded fish species is 311 across several surveys. High numbers of Galapagos sharks Carcharhinus galapagensis were observed at the reef, which may indicate that the reef is a nursery. Sea cucumber (black teatfish), Holothuria whitmaei, were found in high numbers. While the 2003 survey found only small numbers of crown-of-thorns starfish, a survey in 2005 indicated that it was active.

Both Elizabeth Reef and Middleton Reef have been the site of numerous shipwrecks. According to the National Shipwrecks Database, the ships stranded at Elizabeth Reef include: Britannia, Colonist, Douglas, Elizabeth, Naiad, Packet, Ramsay, Rosetta Joseph, and Tyrian.

Britannia is listed for both Elizabeth and Middleton Reefs.

British sailor Steve Landles was winched to a Royal Australian Navy Sea Hawk helicopter from the stranded yacht Lamachan on 2 August 2007; the yacht could not be recovered.

All content from Kiddle encyclopedia articles (including the article images and facts) can be freely used under Attribution-ShareAlike license, unless stated otherwise. Cite this article:
Elizabeth Reef Facts for Kids. Kiddle Encyclopedia.