Elk Mountain Ski Resort is a ski area in the Endless Mountains on the summit of North Knob in Herrick Township, Susquehanna County, near Union Dale, Pennsylvania. It is located 30 miles north of Scranton PA. The mountain has been given favorable reviews from Ski Magazine, including a listing in "Six Unsung Heroes", a roundup of hidden gems in skiing. 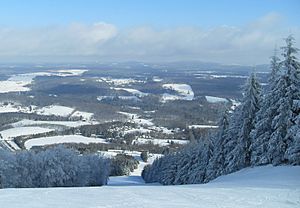 The Endless Mountains, as seen from the top of Elk Mountain

North Chair at Elk Mountain accesses a top elevation of 2,667 ft (813 m)—the highest lift-serviced skiing in eastern Pennsylvania. Elk has a 925 ft (282 m) vertical drop, 27 trails (6 greens, 10 blues and 11 diamonds) and two terrain parks. Five double chair lifts and a fixed-grip quad chair lift provide access to the top of the mountain. Four of the lifts, including the quad, run from the base to just below the summit of the mountain. Most ski runs are groomed, but a few are allowed to bump up, or become moguled, to allow for additional challenge. The mountain receives, on average, 5 feet of natural snow per season. Snowmaking covers 100% of the 180 acres (73 ha) of skiable terrain. The base complex features a day lodge, guest services, ski school center, restaurant, rentals, and a ski-and-snowboard shop.

All content from Kiddle encyclopedia articles (including the article images and facts) can be freely used under Attribution-ShareAlike license, unless stated otherwise. Cite this article:
Elk Mountain Ski Area Facts for Kids. Kiddle Encyclopedia.