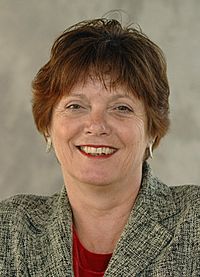 Catharina Pieternella "Ella" Vogelaar (23 December 1949 – 7 October 2019) was a Dutch politician. She was a member of the Labour Party (PvdA) and trade union leader. Vogelaar was born in Steenbergen, Netherlands. She was the Minister for Housing,
Communities and Integration from February 2007 through November 2008.

All content from Kiddle encyclopedia articles (including the article images and facts) can be freely used under Attribution-ShareAlike license, unless stated otherwise. Cite this article:
Ella Vogelaar Facts for Kids. Kiddle Encyclopedia.