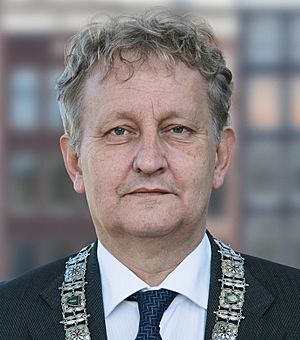 Van der Laan was born in a Reformed family, and studied law at the Free University Amsterdam.

He was a member of the city council of Amsterdam from 1990 to 1998 (partly also group leader), minister of Housing, Residential Areas and Social Integration in the Fourth Balkenende cabinet from 2008 to 2010, and mayor of Amsterdam from 2010 till his death in 2017.

He died of lung cancer at the age of 62.

All content from Kiddle encyclopedia articles (including the article images and facts) can be freely used under Attribution-ShareAlike license, unless stated otherwise. Cite this article:
Eberhard van der Laan Facts for Kids. Kiddle Encyclopedia.