It is the municipality farthest south in the valley of the Sernf. 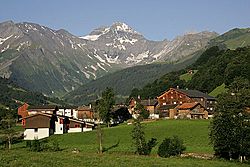 Russian General Alexander Suvarov and his troops stayed the night in Elm before crossing Panix Pass to Pigniu on their retreat into Austria.

On September 11, 1881, an avalanche caused by too much mining of slate killed 114 people and buried 83 structures in the municipality.

All content from Kiddle encyclopedia articles (including the article images and facts) can be freely used under Attribution-ShareAlike license, unless stated otherwise. Cite this article:
Elm, Switzerland Facts for Kids. Kiddle Encyclopedia.