The Elsinore Mountains are a ridge of mountains within the larger range of the Santa Ana Mountains, in the Cleveland National Forest, Riverside County, California, United States. the tallest peaks within the range is the unofficially named San Mateo Peak at 3,591 ft (1,095 m). Second is officially named Elsinore Peak at 3,536 ft (1,078 m). The Elsinore Mountanins run in a ridge from just east of El Cariso, southeast to Elsinore Peak. Beyond that peak the ridge begins to descend and curves to the east. From Elsinore Peak, a ridge runs to the west and then northwest to San Mateo Peak, enclosing the Morrell Potrero on the south and west. 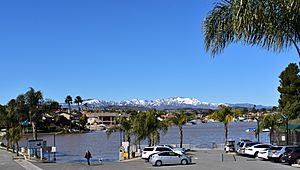 All content from Kiddle encyclopedia articles (including the article images and facts) can be freely used under Attribution-ShareAlike license, unless stated otherwise. Cite this article:
Elsinore Mountains Facts for Kids. Kiddle Encyclopedia.