Frey was born in Arlesheim, in the Canton of Basel-Landschaft, to Emil Remigius Frey and Emma Kloss. His father was a liberal separatist politician.

Frey's family provided refuge for Friedrich Hecker when he fled the repression following the revolution in Germany in 1848. After attending gymnasium in Basel, Frey went to study in an agronomical institute in Jena. In 1860 he emigrated to the United States, arriving in Belleville, Illinois, an area with many Forty-Eighters, veterans of the 1848 revolutions in Europe. For a while he worked for Hecker, but they had a falling-out.

Career during the American Civil War 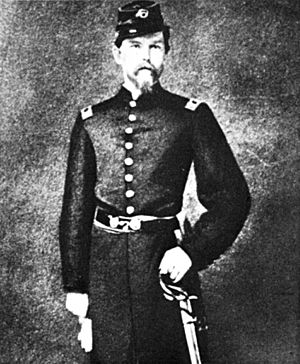 Frey entered the unionist 24th Illinois Volunteer Infantry Regiment as a private. Frey wrote in his essay "My American Experiences" that "on 17th of June [1861] I enlisted in the 24th at Chicago. On that same day I was appointed by Colonel Hecker to be the colorbearer of the regiment, and in the evening we left Chicago for Alton, Ill." Hecker was his commander, and they became friends again, with Frey sharing a tent with Hecker's son. Frey was later promoted to first lieutenant but resigned on 17 June 1862. He began raising a company for the Second Hecker Regiment (The 82nd Illinois Volunteer Infantry Regiment) and became the company's captain. Captain Frey was taken prisoner at the battle of Gettysburg on 1 July 1863 and held in Libby Prison for eighteen months before being exchanged for Captain Gordon, a Confederate prisoner under sentence of death.

From 1882 to 1888, Frey was the first ambassador (Minister) of Switzerland to the United States in Washington.

He was elected to the Federal Council of Switzerland on 11 December 1890 and handed over office on 31 March 1897. He was affiliated to the Free Democratic Party. During his office time he held the Military Department.

He was President of the Confederation in 1894.

From 1897 to 1921, Frey was director of the International Telegraph Union.

All content from Kiddle encyclopedia articles (including the article images and facts) can be freely used under Attribution-ShareAlike license, unless stated otherwise. Cite this article:
Emil Frey Facts for Kids. Kiddle Encyclopedia.