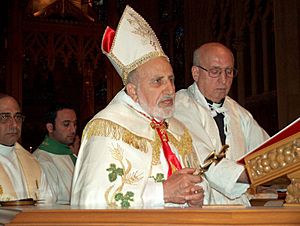 Mar Emmanuel III Delly (26 October 1927 – 8 April 2014) was an Iraqi Catholic leader. He was the Patriarch Emeritus of Babylon of the Chaldeans and former Primate of the Chaldean Catholic Church. His name in Arabic is مار عمانوئيل الثالث دلّي . In Syriac it is ܡܪܝ ܥܡܢܘܐܝܠ ܬܠܝܬܝܐ ܕܠܝ. He was born in Tel Keppe.

Delly died on 8 April 2014 at a hospital in San Diego, California in the United States. He was 86 years old.

All content from Kiddle encyclopedia articles (including the article images and facts) can be freely used under Attribution-ShareAlike license, unless stated otherwise. Cite this article:
Emmanuel III Delly Facts for Kids. Kiddle Encyclopedia.