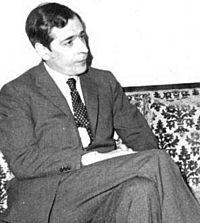 Vincenzo Bettiza (7 June 1927 – 28 July 2017) was a Croatian-born Italian novelist, journalist and politician. He was born in Split, Kingdom of Yugoslavia (present day Croatia).

Bettiza has been director of several Italian newspaper and author of numerous books. as a journalist he devoted his attention to Eastern European countries and nationalities, and Southeastern Europe, Yugoslavian area in particular.

In the period 1957-1965 he was foreign correspondent for the newspaper La Stampa, first from Vienna and then from Moscow. Later he moved to Corriere della Sera, for which he worked for ten years.

Starting from 1976, he was member of the Italian Senate and the European Parliament.

All content from Kiddle encyclopedia articles (including the article images and facts) can be freely used under Attribution-ShareAlike license, unless stated otherwise. Cite this article:
Enzo Bettiza Facts for Kids. Kiddle Encyclopedia.