Erythroxylum novogranatense is a neotropical species of Erythroxylum (Erythroxylaceae). Cocaine is produced from the leaves.

"Novogranatense" is derived from Latin: novo (new) and granatense (Granada). It was named by William Turner Thiselton-Dyer, the third director of Royal Botanic Gardens, Kew, because its country of origin was the Spanish colonial Viceroyalty of New Granada—present day Colombia.

These two subspecies are phenotypically similar, but morphologically distinguishable.

Among the genus Erythroxylum, cocaine-rich leaves are obtained from 4 taxa:

Erythroxylum novogranatense was originally identified as E. coca, subsequently described as a variety, and finally came to be recognized as its own species.

Erythroxylum novogranatense var. novogranatense is native to Colombia and Venezuela, but its adaptability and easy propagation has led to a wide distribution over the Old World and New World tropics. It was introduced in Bogor (West Java, Indonesia) in 1875, and by 1888 large quantities of seed were already being distributed in South-East Asia. It has been grown in Peninsular Malaysia, western and eastern Java (Indonesia), northern Borneo (Indonesia), northern Sulawesi (Indonesia) and the Philippines (Luzon).

Erythroxylum novogranatense var. truxillense is grown in arid areas in northern Peru. Neither of these 2 varieties is known from wild populations.

Erythroxylum novogranatense is a highland variety that is utilized in lowland areas. It is cultivated in drier regions in South America, where it requires irrigation. However, E. novogranatense is very adaptable to varying ecological conditions, and grows well in both humid and dry areas, and at low and higher altitudes. In Java (Indonesia), E. novogranatense has been cultivated from sea-level to 1,000 m (3,300 ft) altitude, with best results at 400–600 m (1,300–2,000 ft).

In controlled environment studies, the optimum average daily temperature for leaf growth for E. novogranatense var. novogranatense was found to be around 27 °C (81 °F), whereas leaf growth was generally higher at photosynthetic photon flux densities (PPFD) of 250 or 400 micromol per meter square per second than at 155 micromol per meter square per second. Environmental effects on the cocaine concentration in the leaves were smaller, so that total cocaine production per plant was largely a function of leaf mass, with environmental conditions that stimulated leaf growth giving higher cocaine yields. Both species grow on soils with low pH, and a greenhouse study has shown that the optimum pH for biomass accumulation of E. novogranatense is between 4.7 and 6.0.

Erythroxylum novogranatense var. novogranatense, E. novogranatense var. truxillense and E. coca var. coca have to be reproduced by seed, because vegetative propagation is difficult. However, E. coca var. ipadu does not produce seed and is produced by stem cuttings. It cannot reproduce without human interference. Cultivated E. novogranatense var. novogranatense produces abundant seed and is easy to propagate. Seed viability decreases rapidly. Germination percentages of E. coca and E. novogranatense seed were found to decrease from around 95% and 89% directly after harvesting to 29% and 0%, respectively, after 24 days of storage at 4 m (13 ft). Coca seedlings are usually sown in shaded nurseries and transplanted to the field when they are about one year old and 20–25 cm (7.9–9.8 in) tall. In the field, they are planted at a spacing of 1–2 m (3 ft 3 in–6 ft 7 in). The actual time of transplanting and the spacing of the plants varies with climatic factors and whether coca is interplanted or cultivated as a sole crop.

Coca farmers in South America, when collecting their seeds, pour them into a container of water; the seeds that float are discarded as they are non-viable. 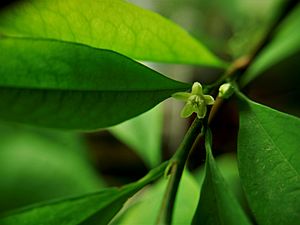 The first harvest of coca takes place at 1–3 years after transplanting. In the Island of Java (Indonesia), a first harvest can be expected within a year after transplanting. The leaves have to be stiff and easily detachable to be harvested. Leaves can be harvested every 50–60 days in the rainy season, but when it is drier, they are usually harvested every 3–4 months. The leaves should be pinched from the plant, not ripped off.

All content from Kiddle encyclopedia articles (including the article images and facts) can be freely used under Attribution-ShareAlike license, unless stated otherwise. Cite this article:
Erythroxylum novogranatense Facts for Kids. Kiddle Encyclopedia.