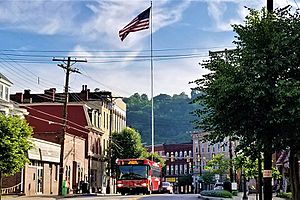 Etna is a green community just outside of Pittsburgh, PA.

In 2019 Etna was recognized as the first ever EcoDistrict. Etna is focused on social and environmental justice for its community, environment and neighbors through outreach and revitalization. Considered one part of the triboro EcoDistrict, Etna stands apart in its recognition of visual arts and attention to the importance of expression through art.

The Etna Riverfront Trail opened October 22nd 2021. The Etna segment of the Riverfront trail project will connect via bike path to a series of Riverfront Parks including Millvale, The North Shore, Sharpsburg and Aspinwall.

Etna was named after the volcano Mount Etna, an allusion to blast furnaces, steel mills, galvanized-pipe works, and other manufacturers located there; historically a steel town with a blue collar community. In 1900, 5,384 people lived in Etna. In 1940, 7,223 lived there. The population was 3,451 at the 2010 census.

Etna was the terminus of the No. 2 Pittsburgh Railways streetcar service from downtown Pittsburgh, closed in 1952. From 1907 until 1931, it was a stop on the interurban Pittsburgh and Butler Street Railway, which linked Pittsburgh with Butler.

Etna is situated on the north bank of the Allegheny River. It is bordered by Shaler Township to the west and north, by Sharpsburg to the east, and by Pittsburgh across the river to the south. Millvale is to the southwest, separated from Etna by part of Shaler Township.

All content from Kiddle encyclopedia articles (including the article images and facts) can be freely used under Attribution-ShareAlike license, unless stated otherwise. Cite this article:
Etna, Pennsylvania Facts for Kids. Kiddle Encyclopedia.