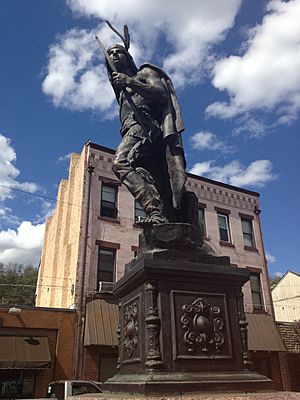 The third incarnation of the Native American Statue located in the heart of the Sharpsburg Central Business District, commonly referenced as Chief Guyasuta. 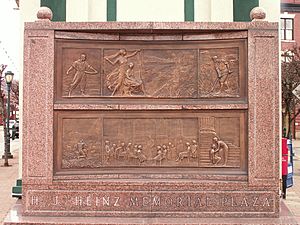 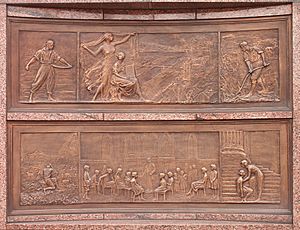 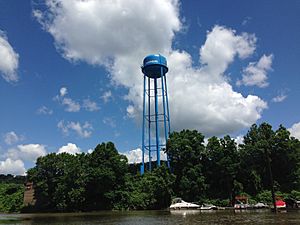 The Sharpsburg Water Tower as viewed from the Allegheny River.

In the past, it had a rolling mill, foundries, machine shops, and manufacturers of varnish, brick, glass, lumber products, wire, hair, felt, and lubricating oil. In January 1869, the H. J. Heinz Company was founded in Sharpsburg as Heinz Noble & Company to manufacture and sell bricks.

Sharpsburg is bordered by Etna to the west, Shaler Township and O'Hara Township to the north, and Aspinwall to the east. To the south, across the Allegheny River via the 62nd Street Bridge, are the Pittsburgh neighborhoods of Upper Lawrenceville and Morningside.

Guyasuta and the Seneca Indians

The borough of Sharpsburg is located along the Allegheny River just over 5 miles (8 km) outside of downtown Pittsburgh. Sharpsburg has a rich history dating back to the 18th century when the Seneca Indians settled into the area. One Seneca in particular, Guyasuta, has a special connection to the community.

Guyasuta was a strong warrior and skilled hunter. He was chosen by George Washington to be a hunter guide with his party in 1753. When the two met again in Ohio 17 years later, General Washington greeted him with warmth and affection. In 1758, Guyasuta was involved in a bitter battle at Grant's Hill, where the Allegheny County Courthouse stands today. In the early 1760s, Guyasuta sought peace with the British Army. Guyasuta's peace efforts culminated in a peace treaty, in which the government received a tract of land in what is now western Pennsylvania. James O'Hara, who had purchased a portion of the river land, donated a small portion of it, where Sharpsburg is today, to Guyasuta.

James Sharp and the initial settlement

In 1826, a man named James Sharp rode into this area and purchased 200 acres (0.81 km2) of land, building a log cabin for his wife. Opening the land to settlers, Sharp built a school and church while continuing to donate his land for the growing needs of the community. On December 14, 1841, the borough applied for incorporation, and received its charter March 14, 1842. According to the Sharpsburg town web site, http://www.city-data.com/city/Sharpsburg-Pennsylvania.html, incorporation was March 26, 1842.

Since its incorporation, Sharpsburg became an industrial town, manufacturing iron, brick and glass while goods were transported through the canal that bisected the borough, along with the Allegheny River. When railroads became the preferred mode of transportation for that time, Sharpsburg continued to thrive as thousands came for the plethora of job opportunities available.

One of the most well-known industries that had its beginnings in Sharpsburg was the H. J. Heinz Company. The Heinz glass works in Sharpsburg once manufactured all of the glassware for Heinz products. In 1869, Heinz began creating and bottling his first horseradish in the kitchen of his Sharpsburg residence. This house is the place where it all began. Shortly thereafter, the house became Heinz’s first factory. Although he moved his company down the Allegheny along the North Shore of Pittsburgh, he was very gracious to the people of Sharpsburg until his death, donating gifts to the community that was his family home for many years. One of these included the life-sized statue of Guyasuta that was installed at the intersection of Main and North Canal streets. The statue has twice been hit by automobiles—the first occurrence in 1930 and the second occurrence in 1988. Each incident resulted in the destruction and subsequent replacement of the statue.

Less than a century ago, Sharpsburg was divided into two sections because of a railroad track that went through the location where Kennedy Park currently sits. There were two fire departments, one on each side of the tracks. There were two schools on each side of the track as well, one "up street" and one "down street". Once the railroad tracks weren’t used anymore, the railcars sat vacant on the tracks. The Junior Chamber of Commerce in Sharpsburg went to the railroad company as well as the Heinz family to try to change something about this. The Heinz family said they would help build a park if it was used for recreation purposes only. The park was built around the time when President John F. Kennedy was assassinated, and that is why the area was named Kennedy Park.

Today, Sharpsburg continues to boast pride of its industrial past while looking forward to the opportunities of economic growth within the business district, and its residents enjoy being a part of this unique riverfront community. 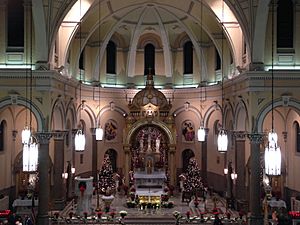 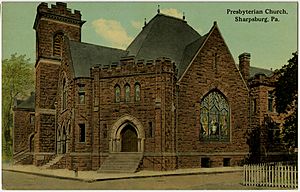 The Sharpsburg Presbyterian Church located at 13th and North Canal Streets, now the location of the Northern Area Multi-Service Center.

Located within Sharpsburg are numerous churches and other religious gathering places. Most notably, though, in the borough, is the Catholic community. Three churches, St. Mary Church, Madonna of Jerusalem Church, and St. John Cantius Church, form the Saint Juan Diego Parish. Bishop David Zubik of the Diocese of Pittsburgh created the parish in 2009, at the behest of the parishioners, who called for the three churches to form one parish. Saint Juan Diego, a Native American from Mexico, was chosen as the name of the parish because of Sharpsburg's ties with Native Americans, specifically Guyasuta and the Senecas.

In summer 2015, the Sharpsburg Community Library, a branch of the Cooper-Siegel Library, reopened after a one-million dollar renovation funded through state grants and private donations. The renovated library expanded its size and design, in addition to adding to its circulating collection. The reopening was organized by Borough residents, the Sharpsburg council, and donations from various philanthropies. For its design, the Library was awarded a 2015 Certificate of Merit from the American Institute of Architects Pittsburgh chapter.

The Library is also home to the Sharpsburg Community Garden, which features numerous raised beds for residents to grow and nurture vegetable gardens.

Kennedy Park is located in the center of the borough. It is a large swath of land that is dedicated to the Guyasuta Days Festival, held annually in August. Kennedy Park is outfitted with outdoor facilities, including a kitchen area and seating. Also located at Kennedy Park is one large BasketBall court

The park at 16th and Main is opened in the spring and summer months. There is a water fountain within the park that is used by children in the hot summer months to find an escape. In addition, the park is home to numerous swings, carousels, teeter totter, basketball court, picnic area and other play sets.

Sharpsburg is also home to a free-of-charge boat launch. Located at 13th and Main Streets, the James Sharp Landing serves as a spring, summer, and fall escape for all. Built in recent years through the efforts of Borough Council as well as state and federal support, the Landing attracts to Sharpsburg a wide variety of individuals and groups looking to enjoy the outdoors. The Landing is home to a boat launch, a thirty-foot fishing pier, a pavilion, a gazebo, and a kayak launch. Additionally, the Landing also hosts the annual Sharpsburg Fishing Derby, attracting hundreds of anglers looking to capture the grand prize, which has reached $40,000.00 in recent years.

View of the Allegheny River from James Sharp Landing.

In 2017, the Fox Chapel Area School District was ranked the number two school district in the Pittsburgh region and number six in the Commonwealth.

Sharpsburg is the birthplace of or the home to several notable people, including:

Guyasuta, Chief of the Seneca Indians.

James Sharp, early settler and namesake of the Borough.

Hon. John D. Shafer, Dean of the University of Pittsburgh School of Law and President Judge of the Allegheny County Court of Common Pleas.

All content from Kiddle encyclopedia articles (including the article images and facts) can be freely used under Attribution-ShareAlike license, unless stated otherwise. Cite this article:
Sharpsburg, Pennsylvania Facts for Kids. Kiddle Encyclopedia.