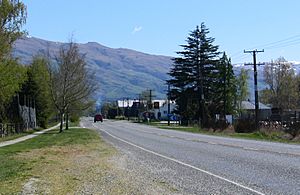 Looking along State Highway 8 at Ettrick

Ettrick is a small town in inland Otago, in the South Island of New Zealand.

Ettrick is located on the Clutha River and State Highway 8 south of Roxburgh and five kilometres northwest of the small settlement of Millers Flat. Like many other settlements in the area, all of Ettrick's streets are named after towns in the Scottish Borders.

Ettrick was founded by Scottish settlers during the Central Otago goldrush in the 1860s, and was named after the Ettrick Valley in the Scotland. Ettrick was one of the first places in New Zealand where settlers started to grow apples. Today the main income is from farming, sheep and beef and a dwindling number of fruit growers, mainly apple.

The town also has a quaint tearoom, which caters to visitors and was the background for a Toyota Hilux advertisement in 2011.

Recently New Zealand's only McDonald's-themed museum opened to the public in Ettrick, boasting the largest collection of McDonald's paraphernalia in the Southern Hemisphere.

Alan Garthwaite, the collector and owner of the museum, has been collecting McDonald's knick-knacks for over 25 years. His collection consists of burger boxes, cups, hats, toys, watches, badges, dolls and uniforms, some dating back 40 years.

All content from Kiddle encyclopedia articles (including the article images and facts) can be freely used under Attribution-ShareAlike license, unless stated otherwise. Cite this article:
Ettrick, New Zealand Facts for Kids. Kiddle Encyclopedia.