Eucalyptus loxophleba, commonly known as York gum, daarwet, goatta, twotta or yandee is a species of tree or mallee that is endemic to Western Australia. It has rough bark on the trunk, smooth olive to brownish bark above, lance-shaped adult leaves, flowers buds in groups of between seven and eleven, white flowers and conical fruit. 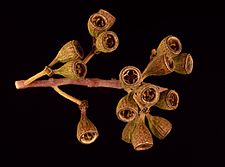 Eucalyptus loxophleba was first formally described in 1867 by George Bentham in Volume 3 of Flora Australiensis.

In 1903 William Fitzgerald changed the name to Eucalyptus foecunda var. loxophleba, but the name is not accepted by the Australian Plant Census.

Hybrids with E. absita and E. wandoo have been recorded.

In 1972, Ian Brooker described the subspecies gratiae and loxophleba and in 1992 Lawrie Johnson and Ken Hill described subspecies lissophloia and supralaevis. All four names have been accepted by the Australian Plant Census.

Woodlands containing E. loxophleba is found across a broad swathe of Western Australia from the Mid West south through the Wheatbelt and east into the Goldfields-Esperance region of the state. It is found among rocky outcrops and on flats, rises, slopes, hilltops, near salt lakes and along drainage lines. The species will grow in a range of soil types such as red-brown or rocky loam, in sands or sandy clays over laterite, dolerite or granite. The tree was recorded as common around the early settlement of York, whence the vernacular "York gum" is derived, and areas near Bolgart, Toodyay, Northam and from Narrogin to Broomehill.

Natural populations of E. loxophleba grows in areas affected by dryland salinity. All four subspecies could possibly be used in the remediation of dryland salinity, but subspecies lissophloia has been more widely cultivated because of its potential as an oil mallee. This subspecies has also been introduced to the eastern States in planting for carbon sequestration. Historically, the wood of subspecies loxophleba was used by wheelwrights and similar workers.

The heartwood of the tree is yellow-brown, hard and tough with an interlocked grain. The wood has a green density of about 1185 kg/m3 and an air-dried density about 1060 kg/m3.

All content from Kiddle encyclopedia articles (including the article images and facts) can be freely used under Attribution-ShareAlike license, unless stated otherwise. Cite this article:
Eucalyptus loxophleba Facts for Kids. Kiddle Encyclopedia.