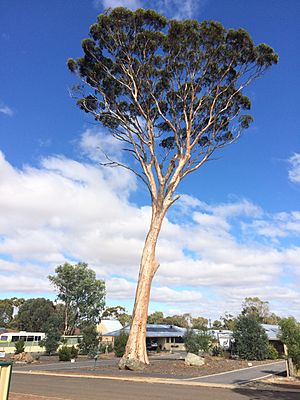 Eucalyptus salmonophloia, commonly known as salmon gum, wurak or weerluk, is a species of small to medium-sized tree that is endemic to Western Australia. It has smooth bark, narrow lance-shaped to curved adult leaves, flower buds in groups of between nine and thirteen, creamy white flowers and hemispherical fruit.

Eucalyptus salmonophloia looks much like E. salicola, both having a similar habit and salmon-coloured bark, however, E. salmonophloia is differentiated by its egg-shaped to lance-shaped juvenile leaves and spherical buds. Eucalyptus salicola is also able to tolerate a saline habitat.

Eucalyptus salmonophloia was first formally described by the botanist Ferdinand von Mueller in 1878 in his book Fragmenta Phytographiae Australiae, from samples collected by Ernest Giles from near Victoria Springs. The specific epithet refers to the salmon-coloured bark.

The Noongar peoples know the tree as wurak or weerluk.

Found in large woodland communities, E. salmonophloia is found in the southern Wheatbelt and Goldfields-Esperance region of Western Australia. In western areas there are remnant populations, extending from the York and Northam areas, south to around Jerramungup mostly as a result of agricultural practices. Eastern occurrences are far less disturbed and extend as far east as Cundeelee to the north around Mt Gibson area and south to around Salmon Gums. The tree usually dominates these communities forming a sparse upper canopy. Found growing in broad valleys, plain and low hills in areas that receive as little as 250 millimetres (10 in) of rain per year it grows in alkaline loamy soils red clay loam or clay and red sandy soils often with gravel. It is found in granite soils in western areas and calcerous soils in eastern areas.

This species of Eucalypt is known to have a life span of over 150 years.

The timber produced by E. salmonophloia is noted for its durability and is used to make railway sleepers and mining shaft supports. Historically, the mining industry cut down the tree to use for construction and as a fuel source, and along with two acacia species is credited with allowing the development of the goldfields. The state's forest department (1922) promoted the high density of timber as the second strongest in Australia. It is still commonly used for wood fires and makes excellent firewood. It is an excellent species for rehabilitation areas and for areas requiring soil stabilization as it is drought tolerant, frost resistant, fast growing and able to grow in poor soils. The heartwood of the tree is fine-textured, dense with a reddish to dark red-brown colour and has considerable potential for use in high value furniture, flooring, panelling, craftwood and in musical instruments such as flute headpoints. Craftsmen rate the wood as good for turning, machinability, boring, screwholding, stability, sanding, gluing and finishing. Honey flow for apiculture is reported from December to March.

All content from Kiddle encyclopedia articles (including the article images and facts) can be freely used under Attribution-ShareAlike license, unless stated otherwise. Cite this article:
Eucalyptus salmonophloia Facts for Kids. Kiddle Encyclopedia.