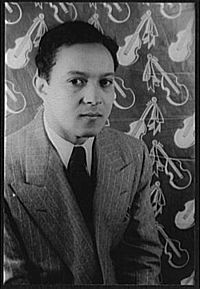 Everett Lee (born August 31, 1916) is an American conductor and violinist. He was the first African-American to conduct a Broadway musical. He was also the first African-American to conduct a performance by a major US opera company. In September 1945, he became the main conductor of the musical On the Town. He later conducted at Tanglewood. He served as director of Columbia University's opera department in the early 1950s.

Lee was born in Wheeling, West Virginia. In 1927, he moved with his parents to Cleveland, Ohio. He married Sylvia Olden Lee in 1944. The couple later divorced. He later married his second wife. He lives in Sweden. He turned 100 in 2016.

All content from Kiddle encyclopedia articles (including the article images and facts) can be freely used under Attribution-ShareAlike license, unless stated otherwise. Cite this article:
Everett Lee Facts for Kids. Kiddle Encyclopedia.