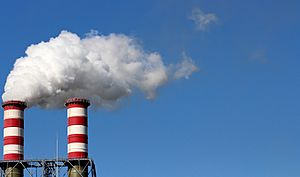 Air pollution is an externality

In economics, some decisions affect third parties. These parties can be affected by the decision positively or negatively, but this influence is involuntary. This is known as an externality, or an external effect. The problem with externalities is that no one pays for the cost of these effects. Usually, they are not part of the decision process. Externalities are often a form of market failure. In many cases, actors like states need to become active.

An example of an externality is pollution. One way to solve this is to introduce taxes on the goods that cause the pollution, for example carbon dioxide, which is the one of the causes of global warming. With concepts such as emissions trading, these externalities can again become part of the market system (and are no longer external).

All content from Kiddle encyclopedia articles (including the article images and facts) can be freely used under Attribution-ShareAlike license, unless stated otherwise. Cite this article:
Externality Facts for Kids. Kiddle Encyclopedia.