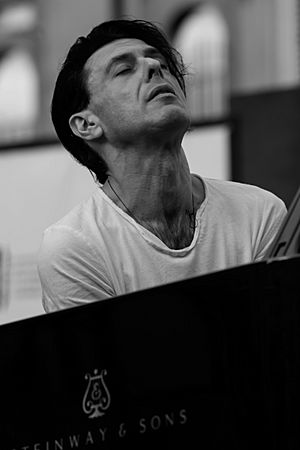 On October 30, 2015 his first major studio album, The 12th Room, was released and peaked at number three on the Italian FIMI albums chart. Bosso has won several awards for his compositions, including the Australian Green Room Award, the Syracuse NY Award and two David di Donatello Awards.

In September 2019 Bosso announced that he was diagnosed with motor neurone disease. He died from the disease on 15 May 2020, aged 48.

All content from Kiddle encyclopedia articles (including the article images and facts) can be freely used under Attribution-ShareAlike license, unless stated otherwise. Cite this article:
Ezio Bosso Facts for Kids. Kiddle Encyclopedia.