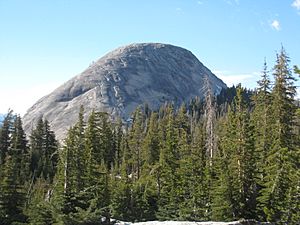 John Muir wrote of the peak:

One of the best general views of the brightest and best of the Yosemite park landscapes that every Yosemite tourist should see, is to be had from the top of Fairview Dome, a lofty conoidal rock near Cathedral Peak that long ago I named the Tuolumne Glacier Monument, one of the most striking and best preserved of the domes... The general view from the summit consists of a sublime assemblage of ice-born rocks and mountains, long wavering ridges, meadows, lakes, and forest-covered moraines, hundreds of square miles of them.

The north face route is popular with rock climbers and is listed in the classic guidebook Fifty Classic Climbs of North America. Routes vary in difficulty up to possibly class 5.11.

Daff Dome on the left, Tuolumne Meadows in the center and Cathedral Range in the right from the summit of Fairview Dome.
Black History Month on Kiddle
African-American Noble Laureates:

All content from Kiddle encyclopedia articles (including the article images and facts) can be freely used under Attribution-ShareAlike license, unless stated otherwise. Cite this article:
Fairview Dome Facts for Kids. Kiddle Encyclopedia.